Tracey Hume, a Deacon at Trinity Methodist Church, Blaydon and The Ark, Crawcrook, has come up with a wonderful idea for positive action! 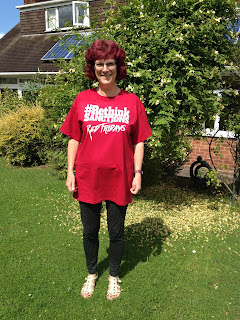 Tracey, who helps lead a Foodbank in her church, says ‘I am so distressed to see people having to resort to a Foodbank because they have been sanctioned. I can't sit and do nothing anymore.'
'After being at Conference and hearing Jill Barber's VP speech I decided that the quiet voice I had been hearing needed to be acted on and the t shirt campaign is what I felt prompted to do.'

The t shirt says #RethinkSanctions, and "On Fridays I wear red and miss a meal in silent solidarity with those people who will struggle to eat today because they have been unjustly sanctioned." 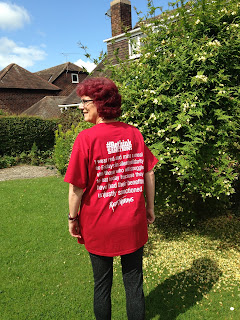 Tracey says, 'The idea is I would like people to buy one of the t shirts and wear it every Friday wherever they are. I would love to see red t shirts being worn in every town and city to raise awareness of this issue and put pressure on the government to look at the system.’

Follow this link to buy a t shirt. The t shirts are ethically and fairly traded as well as organic which is why they are slightly more expensive (£12).

Great to see you in your T-shirt Jill! If people want to find out more about the #RethinkSanctions campaign they can visit www.jointpublicissues.org.uk/rethinksanctions - where they can read the full report by the Methodist Church and others, find out how they can make a difference by writing to their MP (and then write back when they get a standard reply!), and learn more about the impact of benefit sanctions.