The term epiphany means "to show" or "to make known" or even "to reveal." A time when we remember the coming of the wise men bringing gifts to visit the Christ child, who by so doing "reveal" Jesus to the world as Lord and King. The season of epiphany begins on the 6th January the twelfth night after Christmas day.

I wonder how many times you have experienced 'moments of epiphany' when God has spoken to you or you have felt as if something has been made known/revealed to you?

I had a 'moment of epiphany' on Christmas Eve when the postman rang our doorbell with a very unusual delivery...........daffodils ! 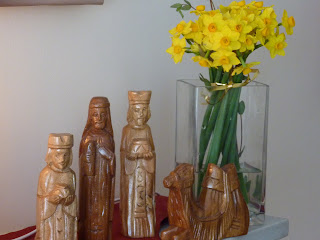 I opened the box of daffodils and read the note, 'Thought you needed a taste of Spring after all the snow.' It was actually snowing when the Postman made the delivery with Newcastle very much in the depths of winter as were many other parts of the country with freezing temperatures unlike we have all experienced for many a winter. Into the depths of winter came a bunch of daffodils and for me a, 'moment of epiphany.'

In these daffodils I felt were a powerful reminder that even in the midst of winter, spring will come the season will pass and new life will emerge.

As I have travelled around the Connexion for the last six months as Vice-President I feel as if I have experienced a variety of seasons within the life of our church. Some churches and their communities are in the midst of winter, facing difficult choices over what needs to be ended and what has already died. Some are experiencing Spring, new life is emerging and new opportunities are being taken.

I believe overall Methodism at present has many signs of new life, resurrection is occurring in many places but we must not rush away from the winter. There are many things which need to end, soil which needs to be dug over, new seeds that need to be sown, old plants that need to be pruned and cultivated in preparation for new growth.

The Magi from the East saw the star because they had been earnestly looking, watching and waiting for many years. Their moment of epiphany became a reality because they were searching for it. I believe we as the people of God called Methodist need to re-capture what it means to seek God, to look for, 'moments of epiphany.' Moments of encountering the living God that we might truly see new life and resurrection in our church and communities.
Posted by Eunice Attwood at 11:36 1 comment:

I made a decision early on in the preparations for being Vice-President that for Christmas I would stay at home in Newcastle joining my colleagues for the many and varied activities of the city centre church, Brunswick Methodist in Newcastle upon Tyne where I do my 'normal job' as part of the team.

Advent began early on 25th November when I participated in the lighting of the Norwegian Christmas Tree outside of the Civic Centre as part of the City Centre chaplaincy team. The Norwegian tree is given every year as a thanksgiving to the city from the people of Norway for their support during the second World War.

At Brunswick we believe Advent provides a wonderful opportunity to share the story of God with the many people who come into and use our building. Our Christmas Tree (15ft) goes up ready for Advent Sunday as do all our decorations. 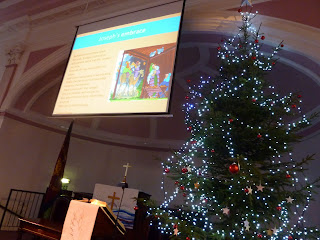 We take the view that when the city has put up all its lights and decorations we will put up our decorations, especially in the church entrance where we place the nativity scene as a reminder to people of the story of God. The decorations themselves provide a great opportunity to convey the message of Christmas. This year we purchased the beautiful 'Follow Him' posters from CPO and hundreds of copies of 'A Gift of Christmas' from the Methodist Church to give away. One of our volunteers made a great PowerPoint for the large screen in our foyer of all the Christmas services in addition to leaflets of service times etc.

We are always delighted to provide Carol Services for our Projects and groups (we never charge but we do accept donations, often discovering the donations are usually greater than our charges!)

In addtion to our usual Carol Services, several of which were shared with the Salvation Army congregation and Chinese Methodist Church who currently meet on our premises we also hosted :-
- The City Annual Remembrance Service for Homeless people who had died.
- Christian Aid Big Sing
- Action for Children Carol Service
- Carol Service for our Projects & User groups
- Service for the International day to End Violence to Sex Workers
- Gift Service for three of our Projects -
Scarpa - Children who runaway
Kumasi - Unaccompanied Young Asylum Seekers
GAP - Street Workers

SPICE TRAIL
We also created a Christmas Prayer Journey in the worship area called THE SPICE TRAIL. A visual display of the Christmas story surrounded by spices (the smell of Frankincense all week was wonderful) with a central area created to sit around the cross and manger beneath a large star of David from which we suspended doves, angels and ribbons for people to place their prayers onto. 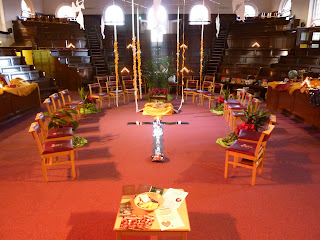 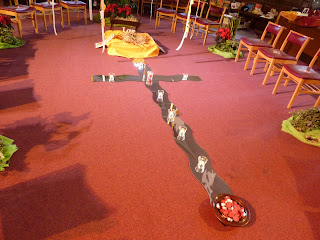 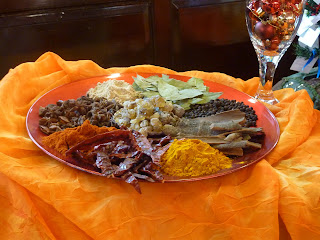 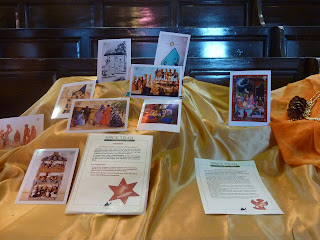 380 people came to visit the Spice Trail during the week and in our communion service on Christmas Eve we included the 210 prayers from the ribbons in our prayers of Intercession. Prayers from a very diverse group of people, those who were certain about faith and those who were not, the rich and poor, those seeking asylum, vulnerable women involved in sex work, homeless people, struggling drug addicts all offering heartfelt prayers to God.

A powerful reminder that the work of Christmas is an everyday calling as described in this famous prayer.

When the song of the angels is stilled,
When the star in the sky is gone,
When the kings and princes are home,
When the shepherds are back with their flock,
The Work of Christmas begins:
To find the lost,
To heal the broken,
To feed the hungry,
To release the prisoner,
To rebuild the nations,
To bring peace among brothers and sisters,
To make music in the heart.
Then indeed we shall be blessed!
Howard Thurman
Posted by Eunice Attwood at 08:56 1 comment:

A wonderful week end with Local Preachers, Worship Leaders and friends, in which we were well looked after by the staff at The Hayes, Swanwick and by the very efficient organisers of this regular annual meeting.

We reflected together on the importance of Advent; on different ways of approaching the celebration of Christmas and Epiphany; and how vital it is to listen to the text. Those of us who have been part of the church for a long time sometimes have a tendency to think we know what a very familiar reading is about, and that may mean we don't give it proper attention. But what does it really have to say to us now?

I am grateful for all that was offered by the faith, experience and gifts of all those who shared the week end with us. Thank you.

After a couple of days at home, I set off through the snow, ice and other weather variants to lead a Quiet Day for a group of Church Leaders in the South-East. It was a joy to discover Wychcroft and receive the hospitality of a Diocesan House I had never visited before. We shared together in the day's reflections which was well worth the very long journey home again.

In case any of you wonder what I do with the days which are marked Reflection Space in the diary, they were intended to provide me with space to reflect on the events of this year and to try and hear what God might have to say to me as it progresses. They have turned out to be time to reflect on how I (and we) need to respond to the issues which people feel should have a high priority for my attention - their complaints, concerns, hurts, difficulties, sorrows, and much more. Here is not the place to explore that, but I am glad of time to think and pray before I, and others involved, reply. These days also give me time to write this - occasionally! - deal with a number of other Presidential matters, and even spend a little time with family!

Thank you all again for your thoughts and prayers ~ and have a blessed Christmas, whatever your personal mix of joy and sorrow. God bless you all.
Posted by Alison Tomlin at 16:46 No comments:

Dave and I did wonder if we would get to Cromer for their Anniversary, but we made it and were welcomed by Sue and John, our hosts, who had once been members at a church where Dave served, as well as by many other helpful folk.

A warming meal, a comfy night, and a service of celebration, during which we were treated to the gifts of both the congregation and the minister who sang for us. And then - in the middle of Advent - a nearly Christmas meal of roast turkey before we made our way home through the frozen wastes.

It was good to share the combination of memories and hopes for the future, and to hear again God's challenge to be willing to change and grow in God's service. Thank you, Cromer.
Posted by Alison Tomlin at 21:56 No comments:

The House ~ which House?

End of November, and still just possible to get to London to make special visits - if you don't live as far north as the Vice-President. Our trains were running even if late and cold, but Eunice and I could not have met in spite of wanting to.

The first 'House' was the Lords, where Kathleen Richardson kindly showed some of us the places where the work is done; and then it was the House of Commons, where other ways of working are in use, and Meg Munn was the helpful guide. The beauty and the history are worth the journey, along with the reminder of how ancient our democracy is. And if you look carefully, there is one Lord on display who bears a remarkable resemblance to the General Secretary!

I'm not sure whether Central Hall quite counts as a house, but we were received there with generous hospitality for the Parliamentary Fellowship Dinner after our "tour" 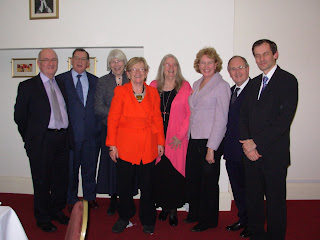 
And the next House was our own - Methodist Church House. It is always good to have time to wander between the floors and talk with anyone who is prepared to let me interrupt their work, but December 1st was an official visit, helping me to learn more about the work and to meet with so many new people, as well as chatting with many I have come to know well over the years. I took part in the team meeting, which I hope Manchester managed to view as well, and was encouraged by the prayers offered and by the work explained.

It was a very enjoyable day for me, but you will have to ask them how they felt about it! We often take their hard work for granted, so I hope we will all remember to give thanks for their commitment and all that they achieve for us.