Although Holocaust Memorial Day is not until Saturday, the UK Ceremony marking this day was held today at Queen Elizabeth II Centre, Westminster and Loraine and I were invited to attend.

We just managed to slide it into the diary, travelling there directly from Methodist Council in Hertfordshire and setting off immediately it finished for Queens Foundation, Birmingham (tomorrow's story).

The ceremony was on a much larger scale than I had expected - perhaps 5,000 people present and a star-studded list of participants. Amidst a 90 minute programme of narration, music, film clips and personal testimony, Derek Jacobi, Charles Dance, Maureen Lipman and Celia Imrie all read from letters and diaries written by Holocaust survivors.

We listened to Richard Dimbleby's landmark BBC radio news report from the Bergen-Belsen concentration camp which alerted the world to the horrors which had taken place, then Jonathan Dimbleby, in the flesh, reflected on the impact on his father, the whole family, and indeed the world, of this shocking news broadcast. He spoke with great integrity and passion, naming anti-Semitism as a 'cesspit which needs to be drained', but also having the courage to suggest that we must be careful not to confuse all criticism of the Israeli government's policies with anti-Semitism.

The theme for this year's commemorations is 'The power of words' so all the contributions linked to this in some way, demonstrating how the Holocaust did not come from nowhere, but began with a campaign of intentional slander, defamation of the character of an entire race, and provocative talk, intended to inculcate hatred and suspicion. Words do indeed have great power, for evil or for good.

Very moving was the conversation between a very elderly Holocaust survivor, Helen, and a much younger survivor of the Bosnian ethnic cleansing as they compared experiences and found much common ground.

At the end of the ceremony 6 large candles were lit, representing the 6 million Jews murdered in the Holocaust but also standing for the 6 atrocities which the Holocaust Memorial Day remembers; the Holocaust itself,  other groups targeted by the Nazi regime and the genocides in Cambodia, Rwanda, Bosnia and Darfur.

One phrase, used by Richard Dimbleby more than 70 years ago, was repeated by many contributors, 'Never again'... but have we learned? Have we changed? Our talkative taxi driver was very much of the opinion that human nature can't be changed... (but that conversation is another story entirely...) as Loraine and I stood with so many others for the haunting, chanted closing prayer, the crosses we wear in our roles felt very obvious and rather rare, but speak of the power for transformation found in the Word become flesh. 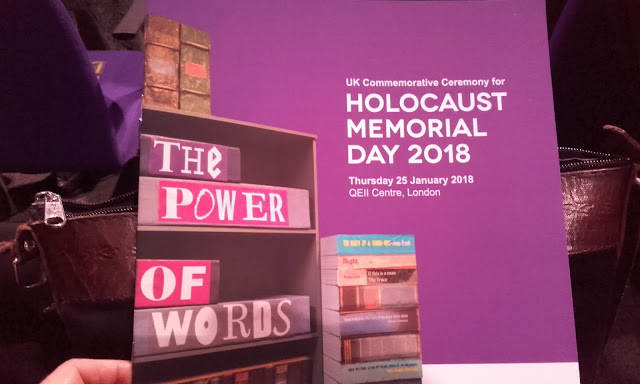 Yesterday evening Andrew and I were delighted to represent Methodism at the Commissioning Service for Ms. Fiona Kendall as a Mission Partner, jointly appointed by the Church of Scotland and the Methodist Church.

The service took place in Kay Park Church of Scotland in Kilmarnock, the church where Fiona grew up (although she has been worshipping in the Methodist Church in Ilkley for the past decade so has strong links with both appointing churches).

It was an excellent service, led mainly by Rev. George Lind, the Moderator of the Presbytery of Irvine and Kilmarnock, and included a splendid sermon by the Very Rev. Dr. David Lacy, a helpful and interesting background to Fiona's appointment with "Mediterranean Hope" in Italy, where she will be working in conjunction with the Methodist Ecumenical Office in Rome (and our other Mission Partners to Italy, Tim and Angela Macquiban), and the presentation of a Bible (in Italian) by Mr. Norman Liddle of the Scottish Bible Society. 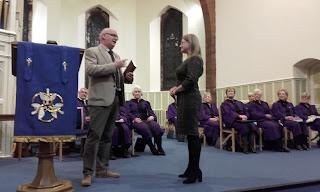 However, the highlight of the service for me, and I think for many, was Fiona's own testimony of how this next step in her Christian journey has come about.  As she told her own story, of her love for languages and the law (and the Lord), of earlier studies in Florence during which time she became fluent in Italian, of a deep desire to work with those on the margins, particularly refugees, the pieces of her calling fell into place so surely that there could be no doubt that Fiona has been called and equipped over many years for the role she will shortly take up as European and Legal Affairs Adviser for Mediterranean Hope, an organisation set up by the Federation of Evangelical Churches in Italy to respond to the crisis of migration.


The Commissioning was led by Rev. Iain Cunningham, Convenor of the World Mission Council of the Church of Scotland, after which I led a prayer of dedication. 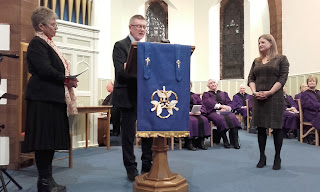 Amongst the hymns (all well chosen and enthusiastically sung by the large congregation - although it was a wild night) we sang Andrew Pratt's challenging and thought-provoking "There are no strangers to God's love", the last verse of which sums up the work to which Fiona has been called:

"When people seeking sanctuary come to this place and need our aid,
then in Christ's name let's offer care; through this our debt of love is paid.
God's grace is free, this grace receive, let actions show what we believe."

News and updates from Fiona will appear on the World Church pages of the Methodist Church website; let's all hold her, and all our mission partners, in prayer, giving thanks to God for them.
Jill
Posted by Jill Baker at 22:13 No comments: