Through all the changing scenes of life

What a varied few days - just like Circuit or District ministry! Presiding at the service to mark the retirement of the writer of the church column in The Northern Echo who is also Chairman of The Northern Football League, world domino's champion (or something!) and real ale expert was an exciting challenge - with football people, journalists, church goes and well-wishers among the 150 congregation in Darlington. A real opportunity to talk about the Christ who holds all things together!
Plymouth and Exeter District is a long way from the north-east and seems more scattered so it was good to be in some of the places at the edge (in Bude and Minehead) as well as in Exeter. Two Circuit Inaugurations and one Circuit service. Folk seemed in good heart, the welcome was warm as were the pasties and the cream teas were delicious! Bang goes the pounds I lost during the Great North Run! Then to the Connexional Leaders Forum (+ extras) in Northampton with some really important discussions centered around The Fruitful Field project. If you haven't heard of it already you soon will! It could have got out of hand especially with me chairing but the graciousness and careful listening to one another that I valued at Conference was present again.
But the highlight of the past few days? Probably visiting the Local Worship and Preachers Trust Home at Westerley in Minehead and just being able to chat to the residents there - one just turned

100 and another (only 93!) who preached at a service when I sensed God's call that I should offer to become a Chair of District. Realised again that Pastoral Care is where my heart is - not least because of all I receive from it!
Before you hear from me again I shall hopefully have survived/enjoyed Conservative Party Conference, Score Chaplains Conference, Methodist Council and a trip to Birmingham to begin my 5 day visit! Its all varied but hugely interesting and an enormous privilege. Thanks for your prayers. Last chance to donate to MRDF (Run Fund!). Can we push it up to £5000 - I think so!
PS In the sea at Sunderland yesterday with Charlotte my wife. You'll never see such a picture again! No one swims at Sunderland (even in July) but then its never been so hot before!

Posted by Anonymous at 11:53 No comments:

Its a little known fact that Joseph The Hymnographer (9th century) wrote a hymn for the Great North Run! It can be found at No. 977 in the Methodist Hymn Book but for some unaccountable reason was not included in Hymns & Psalms or in Singing the faith! The second verse reads:

The prize, the prize secure!

Bare all he could endure,

And bare not always well:

But he may smile at troubles gone

Who sets the victor-garland on.


My experience exactly! Although to be absolutely fair it was not half as bad as I feared and I completed it in 2 hours 55 minutes starting at No. 53509 and ending 34561 (just ahead of a man carrying a fridge but just behind the Tellytubbies!) so I was quite chuffed really! Better still sponsorship for MRDF looks as if it might reach £4000! So thank you for all your greetings, encouragement, prayers and gifts. If you would still like to donate just a reminder that the website is http://www.justgiving.com/lionelosborn
Posted by Anonymous at 14:50 1 comment:

Well it's been a strange couple of weeks! A case of a tale of one city which I was due to visit three times and only ended up going to twice!

Wesley's Chapel was wonderful - a full church, much life and energy and plenty of young people! To preach from Wesley's pulpit and distribute the elements from Wesley's table with memorials to the saints of Methodism all around me was both awesome and humbling. A very special day!

The New Year service at Methodist Church House provided an opportunity to put faces to names because despite what some may think - and the way some are treated - they are people and they work hard for God to enable the church to function at its best. It would be lovely to think that this year they might receive more encouragement and less brickbats from the people called Methodists!

But visit number three to the TUC never happened because at the very last minute they decided they wanted to go "in house" and guests were to be excluded. This was a great pity as links with the Trade Unions have historically been very important to both sides but hopefully normal service will be resumed next year.

But the two "free" days gave me an opportunity to fulfil a promise I had made to the Methodist Church in Ghana when I was there recently and that was to take a gift and certificate to three former missionaries from the British Methodist church who had signed their autonomy document fifty years ago and who they wished to honour. A doddle I thought they're bound to live in London, Manchester or ...... Newcastle? Not a bit of it - North Yorkshire, Somerset and The Republic of Ireland! So I've been to Settle and to Tullamore so far and hope to get to Weston Super Mare next weekend on my way back from Plymouth and Exeter District. They were long days but I think good visits and impossible of course to quantify in terms of distance or time.

Well The Great North Run approaches! Apprehensive but confident I can at least walk if not run it but a pity the sun has started shining warmly in the North-East at last!!
Posted by Anonymous at 15:36 No comments:

September is a month for Beginnings

September 1st A new connexional year dawned hazily on with a promise of a busy schedule. I was looking forward to the visit that evening to the Symphony Hall in Birmingham, where a celebration service was planned for the inauguration of the new Birmingham Circuit. Leo and I had both been invited, and Leo was born and bred in Birmingham. My links are through one of my daughters, who studied and then practised jewellery there, so I had visited fairly frequently. Also, I greatly enjoy the end products from the local chocolate factory!

Preparing for the service with Leo and Bill Anderson in a room marked ‘dignitaries’, it was a great joy when Irene, an ‘ordinary’ yet extraordinary Methodist member, entered the room and invited the President, Vice-President and Chair of District to pray. She led us without a hint of self-consciousness. It’s that kind of thing that makes me proud to be a Methodist.

The service was wonderful, 2 hours of praise and prayer that included drama, dance, a great deal of singing and a very moving meditation on the city. Leo preached a memorable sermon based on his childhood memories of Birmingham and using a number of incidents to illustrate different facets of the theme ‘The River of Life’.

Prayers in the service faced honestly the challenges to be met as such a large circuit, whose three co-superintendents were inducted that evening. May God prosper the work.

September 2nd brought a trip to London to welcome the incoming Youth President, Sam Taylor, and the new OPPs (One Programme Participants) and to say farewell and thank you to the outgoing Youth President Christy- Anna Errington and the previous OPPs. I was glad to be able to honour their work with a certificate. There is a real buzz about the One Programme (previously known as the Youth Participation Strategy). it took a while to refine but now seems to be bringing something really good to the church. The outgoing OPPs had grown in experience and maturity through the opportunity given to them, and were sad to finish. We need to cherish this programme. 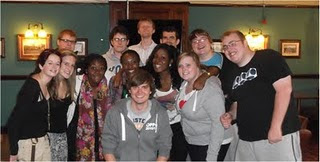 For the President, the joy of preaching in Wesley’s Chapel. For me, a second circuit inauguration. This time it was my home circuit; the new Dane and Trent Circuit. Without leaving the same town I have been a member in three different circuits in 3 years! Prior to the service we gathered for cake and conversation before an act of worship that drew on the skills of about 60 singers and musicians. I was able to draw on some of my experiences with MRDF in Kenya as I encouraged those present to face the future with faith and determination.

To London again. Fortunately it’s a very good train from Stoke-on-Trent which takes less than 90 minutes. This time it is the connexional team’s New Year service, which is an annual event. It’s good to have the opportunity to meet afterwards and get to know some of those who work behind the scenes in administration, and who rarely get thanked. The service was poignant because it was attended by some of the staff from Manchester who would shortly be leaving the team after many years’ service.

This time the train was going north, to Durham, where I attended a two-day conference about Diaconal Ministry (oops, we were told that was tautology) which was very stimulating and even more so because it was well attended by deacons from other denominations. It was also good because it focused on both research and practice. Even better, it was 5 minutes’ walk to the magnificent cathedral, and I managed to spend a little time there. Strangely enough, I encountered a man who used to be our lodger 30 years ago!

September 9th involved the longest journey of the month – 5.5 hours on a cross-country train to the south west, to attend the wedding of godson Tom to Annie, and to pray for God’s blessing on the beginning of their married life on the 10th September.

Posted by Ruth Pickles at 14:01 No comments: