What a blessing to have good weather for January so that it has been possible to fulfil all the engagements.

Like many Methodists, I started the year with a Covenant Service, but not at my home church. I was fortunate to be able participate in the service at Central Hall Westminster, which was wonderful. The newly refurbished organ led the music superbly (well the organist did the work) and the choir blessed us with their singing and the Spirit was truly there. It was a privilege to administer the wine to people who had come from across the world, and who crossed the age 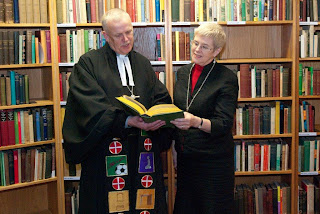 spectrum. The refreshments afterwards went on for about two hours! Then Leo and I had a quick tour of the newly opened library in the Epworth Room – just about all the books ever published by the Epworth Press, including – to our surprise- one on cricket!

I was given two nights’ accommodation by a gracious member of the congregation who lived in Pimlico – a name that has fascinated me for years – and I got a taster of what living in London is like. Then on to two days of meetings, before returning home for a day to pack for my visit to Jersey.

David was able to accompany me on this visit, and we arrived at Jersey airport to be met be Graeme Halls, Superintendent Minister and Synod Secretary. What followed could be described as a working holiday: excellent hospitality from Graeme and Elaine, lovely sunny weather, and the right balance of work and relaxation. The programme included an introductory open 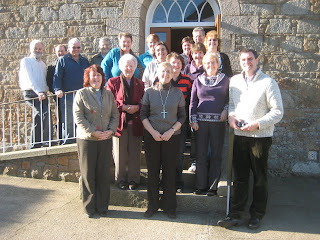 evening; a session with lay workers; a morning of participative bible study with Local preachers and Worship Leaders (at Bethlehem would you believe); a visit to the Women’s Refuge ,which some local people mistakenly think there couldn’t possibly be a need for, and a cup of tea and photo at Samares which is the most southerly church in the British Methodist Connexion. Inside there hangs a photo that is a gift from the most northerly church – in Haroldswick in Shetland. I’ll check when I go there if they have a photo of Samares. 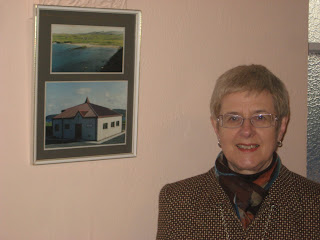 Add to this a radio interview in which I was questioned about the alcohol campaign for minimum unit pricing. Jersey is aware that there is an alcohol problem on the Island and the States of Jersey (the Government) is wondering what it might put in its proposed alcohol strategy. 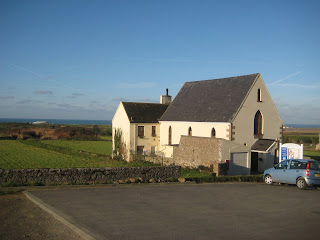 A service at Bethesda – possibly the chapel with the most breath-taking view in Methodism – on the Sunday morning was followed by lunch in the hall and a chance to talk about the reshaping of Methodism. A good exchange of views took place. The evening circuit service was very different for all concerned – we actually made bread at the front of the church, and sat café- style. It worked! 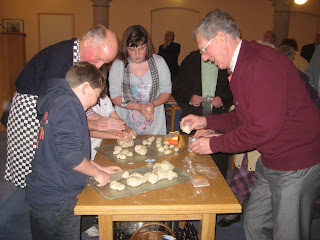 It was really good to get a feel for Methodism away from the mainland, under a different jurisdiction. It can be quite easy to feel detached from things, although the flight to London is less than one hour. But the weather is not always permissive to travellers, and then you are stuck.

The flight to London for us was so that we could be present at the Parliamentary Covenant Service. This is held in the chapel of St Mary Undercroft in the Palace of Westminster. All I can say is – stunning. But, even more wonderful, is the little broom cupboard through the back doors of the chapel. Kathleen Richardson showed us this secret place – the cupboard where suffragette Emily Davison (she who later threw herself in front of the King’s horse at Epsom and died) hid on the night of the 1911 Census so that she could put her place of residence as The House of Commons. Tony Benn has arranged for a plaque in her memory to be placed on the inside of the door – thank you Tony.

Back to London again a week later for the Methodist Council, and then to parliament again – this 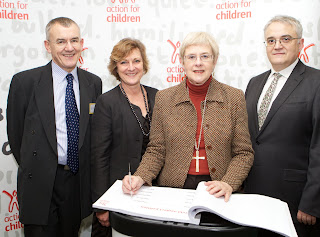 time for an event by Action for Children to publicise the research done into child neglect. This is hugely important work, and fortunately a number of PMs were present including the minister Tim Loughton. At a time when the poorest families are suffering the most under Government budget cuts, it was a timely reminder of how vulnerable many of our children are. Neglect is by far the most common type of child abuse, but often not reported. You can read more about it if you follow this link: http://takeayearon.weebly.com/ You can also sign the petition asking for government action.

Well, that’s it for January – time to prepare for February.

Posted by Ruth Pickles at 22:11 No comments:

An eventful and very fulfilling two weeks - first at Methodist Central Hall Westminster and at Hinde Street for their Covenant Services. Very impressed with numbers of children at the first and 25-40's at the second. Three really good church visits to London (Wesley's Chapel last September). All quite different but each contributing to the wholeness of the Gospel.

Good to catch up with colleagues at Connexional Leaders Forum - missed seeing them as often as usual if not necessarily the meetings! Conference this year will have some important decision to make. Please pray for those preparing and attending.

York and Hull District visit included a day with Supernumeraries (where I was “welcomed” by a former President - see picture!) an excellent meeting with those from smaller churches where a candle was lit (see Stephen Burgess for further illumination), and a gathering with Superintendents, Circuit Stewards and Treasurers attending District Policy Committee to get some tips on how it should be run! Really helpful to have got a feel of how the District operates – so many similarities but significant differences in each place.

Sunday was very special. 200th anniversary at Kirkbymoorside with challenging questions from children including the youngest Heidi (pictured alongside Gwen – oldest member at 97!) Best question: “If you weren’t a Christian which religion would you follow?” Preached in the afternoon at York Minster where all my Mother’s Anglican DNA came to the fore! Pity reading was about Melchizedek and I only had 10 minutes! Evening at Tadcaster Circuit service – good choir, good food, good welcome, no beer! Then to Parliamentary Covenant service at the Chapel of St Mary Undercroft in the Palace of Westminster. A beautiful setting, large congregation and good opportunity to meet and talk with our Methodist MPs and Peers for a few minutes. Pray for them too!

Home for two days. Washing, preparing, catching up on correspondence, trying to recognise Charlotte and now to Isle of Man, Methodist Council, Holocaust Memorial Service and Shetland before I write again! It will all be special!

“I’m busy doing nothing working the whole day through” has come to mind this past fortnight. Where has the Christmas/New Year break gone? Probably as for you in decorating and undecorating our house, collecting a Christmas tree, cooking Christmas dinner, visiting and being visited, wrapping and unwrapping presents and getting my journal up to date, preparing sermons and responding to emails – yes a few of these even on Christmas Day (sad or what?) and in the middle of it all trying to remember the person behind it all! So Christmas services were special – especially using the wonderful service of Holy Communion from MWB – and walking to midnight mass in a local village two miles away under a dark sky and a torch whose batteries gave way half way there was memorable too!

So after a meeting in London I’m back in the north-east before setting off to London again tomorrow. Two Covenant Services at Methodist Central Hall, Westminster and Hinde Street and then CLF at High Leigh. Fun as well as faith-filled I trust!

PS Full page article in the Aston Villa programme about Presidency, Prayer and Programme collecting! Mount Everest just as the team plumbs to the depths!

Posted by Anonymous at 17:08 No comments:

I thought December would be a ‘quiet’ month VP-wise and how welcome that would be so that I could get ready for Christmas. However, I had omitted to take alcohol into consideration! Before your intake of breath becomes so sharp that you choke, let me explain; through our excellent media team and our wonderful, ecumenical, Joint Public Issues Team, the Methodist, Baptist and URC Churches are engaged in a joint initiative with the BBC in a campaign for Unit Pricing of alcohol. As I was for ten years the manager of, and a counsellor in, a community alcohol advisory and counselling service I was asked if I would be the principal Methodist spokesperson on behalf of the campaign. I agreed and in consequence had to do some pretty intensive catch up on the research that has led to the initiative before engaging in conversation with more than a dozen breakfast presenters in BBC Local Radio stations. You can imagine how (un)popular a campaign of this sort is in the run up to Christmas – and what stereotypical ideas much of the media has about Methodists and abstinence. It was good fun though and hopefully made a lot of people think.

Less unusual VP activity was to lead worship in two churches, for special reasons. At St. James’ in Woolton I participated in the series of special services they have had for their 200 years’ Anniversary. Talking afterwards to the choir mistress, I discovered that she had connections with the church I was going to the following week – Lidgett Park in Leeds – and had known my aunt and uncle who had been fellow choristers with her! Just another example of the small world that is Methodism. Lidgett Park has special significance for me for family reasons, and I had asked to be invited there so that I could thank them for all they had done for my aunt and uncle as they became more dependent due to age and infirmity.

Other events were all London based, and included a thanksgiving service at Wesley’s Chapel for the Methodist Recorder’s 150 years in publication. This is a remarkable achievement and the challenges facing all newspapers in this digital age are enormous. Returning to the Methodist International Centre for a night’s accommodation, I was invited to the students’ Christmas party. Now it’s a long time since I went to a student Christmas party and wasn’t sure whether I would be up to it, but it turned out to be a very nice Christmas dinner for the (mainly) international students. The tables were beautifully laid with decorations and crackers; the crackers were most probably made in China, but the Chinese and other students had no idea what to do with them, or what the jokes meant! How on earth did this custom arise for us? Anyway, it was great to have conversation with some very interesting people.

The President has already told you about various meetings we were at together, so I’ll leave it there, only to add that it was a great honour to be asked to preach at midnight communion at my own church on Christmas Eve – something I’ve never done before. Then followed a week at home with lots of family visitors, rest, reading a novel and catching up on my sleep. Wonderful! So now it remains to wish you all a blessed New Year and the awareness of God's presence in all our undertakings in 2012.

Posted by Ruth Pickles at 19:53 No comments: