Harold Wilson is supposed to have said once that "a week is a long time in politics"; I am quite sure he was correct, as, having returned late last night after a visit to the Labour Party Conference in Brighton I can't believe I was only there for 28 hours.  I had never been to Brighton before and found it very different from Glasgow (!) - symptomatic, perhaps, of my feeling of entering a brave new world.  As I arrived before the time appointed for the Free Church Leaders' Group to convene, I sat on the sea wall for a few minutes and pondered the vast grey ocean and a little brightness in the sky above - was this how the Labour Party were feeling at this point in time? 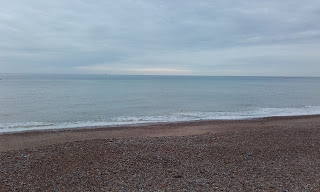 All along the seafront there was a sense of something big happening; lots of delegates and others wearing the lanyards which say to the world "I am someone"... so I put mine on too and entered the Conference venue.  If I had been hoping to bump into Jeremy Corbyn or someone else famous and have a little chat I soon realised that this conference was on a different scale from Methodist Conference and that was highly unlikely!  I enjoyed the buzz as I looked around the stalls and paid over the odds for two (admittedly high quality) "For the many" postcards.  Since it was the lunch break, a kind steward allowed me to have a little look in the auditorium (even though my lanyard only said that I was someone who should be admitted to the balcony - not a proper member) then I made my way to the balcony for the opening of the afternoon session. 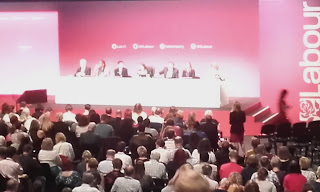 "Good afternoon Conference" sounded familiar as the chair brought us to order and I was half expecting us to sing a hymn at that point... we didn't, although choruses of "Oh Jeremy Corbyn" rang throughout the chamber whenever he was mentioned or appeared.  Speakers were introduced and business proceeded, again with a sense of familiarity, and I pondered on the shared roots of the Labour Party Conference, Methodist Conference and the Trades Union Congress.  However, when it became clear that there would be opportunity for a number of members to speak, those who wished to do so stood on their chairs waving articles of clothing, umbrellas and flags... until the chair indicated who could come forward; "the woman waving the bright green scarf", "the man jumping up and down on the back row..." I did feel that we have a somewhat more decorous system in Methodism!

In the main hall - and wherever I went - there was a great deal of energy, a great deal of optimism that Labour's time is about to arrive and a great deal of passion amongst people who want to create a better world.  The church does not have the monopoly on that!  I came away with a strong sense of God at work in so many ways and through so many channels.

It was so good to meet with the other church leaders later for a briefing meeting and then a meal together.  The Salvation Army had organised our visit brilliantly, with excellent town centre accommodation and really helpful briefing papers.  As well as the Salvation Army, the group comprised church leaders or staff members with responsibility for political life and public issues from Baptist, United Reformed, Quaker and Methodist Churches, along with Steve Hucklesby representing JPIT who do such wonderful work across denominations. 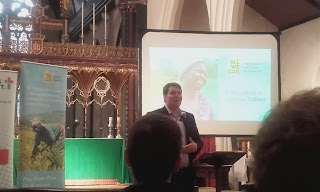 On Tuesday (was that really only yesterday?) we all attended the Prayer Breakfast organised jointly by Christians on the Left and All We Can, where I was proud to hear All We Can's Simon Beresford  speaking about the importance of relationship in international development.  (Delicious breakfast too).  Then we moved to a group of sofas and chairs in the foyer of the Grand Hotel, carefully saved for us by the Salvation Army's superb admin assistant, Olivia. 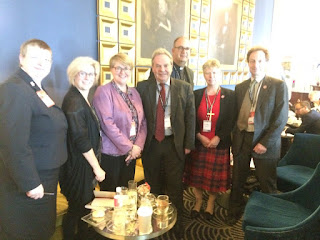 These we occupied for the whole morning - not just sitting around drinking coffee.  One after another we were joined by MPs and other activists (representing the Refugee Council and Joseph Rowntree Foundation) for a succession of quick-fire 15 minute meetings.  At each one we introduced ourselves, asked one or two leading questions, allowing the guest to share what they were involved in, raised some of the related issues in which our churches are working, and offered prayer for the MP and their work before having a photo taken with each one. Discussions focussed particularly on the refugee crisis, poverty, peace-making and, of course, the effect on all of these of Brexit, In all cases we were treated with warmth and appreciation and we sought not to lobby or harangue, but to affirm.  A great privilege and fascinating experience.  As someone who is very much a beginner in politics, I was so glad to have the expertise and insights of the others to inform and guide our discussions and felt again the great wealth of wisdom, compassion and hunger for justice which there is in our churches.

Over lunch time I attended a fringe event with the Scottish Labour Party -  effectively hustings for their new leader - and just had time to catch 20 minutes of Naomi Klein, International Speaker in the main arena, before another short gathering with the church leaders and then my train north... reaching home just before midnight.  What a fascinating time, what a privilege... but a week in politics?  I'm not sure I could take the pace!  Jill
Posted by Jill Baker at 17:41 No comments:

This year continues to unfold with rich and varied experiences and I am so grateful to the Methodist Church for these opportunities (literally, "open doors").

Yesterday began early as I was on the 5:40 train from Glasgow to London - which enables me to be at Methodist Church House for 10:30am (I admit I wouldn't want to do it every day!) I attended Ministries Committee, of which I have been a member for 2 years, and engaged with about a dozen others on a wide-ranging and packed agenda.

I had to leave a little before the end to travel to Westminster Cathedral with Rev. Neil Stubbens, the Methodist Church Ecumenical Officer; together we were representing the Methodist Church in Britain at the service of "Solemn Vespers of the dead" for His Eminence Cardinal Cormac Murphy-O'Connor, former Archbishop of Westminster, who died on 1st September.  In the Sacristy (surrounded by dozens of priests and bishops donning robes of white, black and purple) we were made extremely welcome. Canon John O'Toole, the Catholic Ecumenical Officer, who has attended the last two Methodist Conferences went out of his way to make us feel comfortable and at home and numerous other clergy greeted us, introduced themselves and made conversation, including the current Archbishop, Vincent Nichols. It was certainly good to have Neil there who already knew many of them and was able to fill in bits of background and context for me. 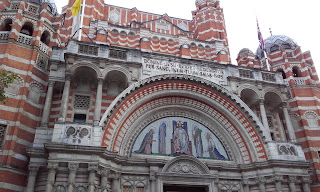 We processed into a packed Cathedral for a service full of awe and beauty but also full of love and thankfulness for a wise leader who had been friend to many there. The choir were superb and the silence held after their rendition of Bruckner's motet "The mouth of the just" was like the silence of heaven. It was my first time inside this magnificent building so I breathed in the sense of the sacred, along with the incense of prayers. 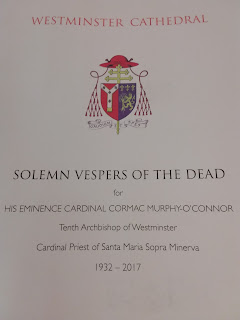 I couldn't help but be aware that, in a procession of at least a hundred all told (plus the choir), I was the only woman. The weight of representation settled on my shoulders! At least one other Methodist woman was present in the service, Gillian Kingston from Ireland, currently Vice-President of the World Methodist Council who came across from High Leigh where she was attending the European Methodist Council so we were glad to catch up with her later. 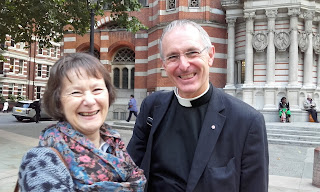 During the two years I have lived in Scotland I have gained a greater understanding of the significance of celebrating the New Year - "Hogmanay" is big north of the border!  The Methodist Church in Britain starts a new organisational year on 1st September each year so for Loraine and me this has been a week of events marking that. 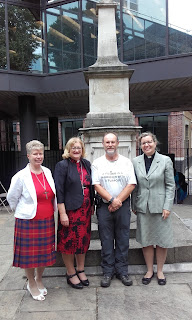 We began on Sunday morning at Wesley's Chapel, City Road, London for a great time of worship and dedication.  It is a time of transition for Wesley's Chapel as Rev. Dr. Jennifer Smith takes the role of superintendent minister so we were delighted to share in worship with her.  Loraine preached on "Ambassadors of Christ" (you can still watch the service here).  As we arrived, we encountered Rev. Jorg Niederer, a Swiss Methodist minister who had walked here from Switzerland over the past two months!  I had been following his blog intermittently during his pilgrimage and was so glad to meet up. 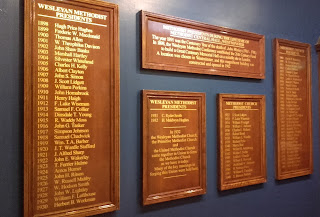 After a fantastic international lunch there we made our way to Methodist Central Hall, Westminster, where we shared in an evening service of Holy Communion and prayers for healing.  This was conducted in a very relaxed and Spirit-filled atmosphere and it was so good to see clergy and laity together giving and receiving ministry in this historic church.  I tackled the evening Old Testament lectionary reading from 2 Kings and you can listen to my attempts to make sense of it here.  We were both somewhat awed to find our names on these boards... we stand in some mighty shoes!

On Monday we shared in a very special event at Methodist Church House as 8 young people were commissioned to serve in a variety of situations as interns for one year.  Abigail, Dean, Georgia, Hannah, Helen, Madalena, Rachel and Rebecca will be in locations as diverse as Action for Children, Rome, Central Finance Board, the House of Lords, JPIT and the Academy for Executive Coaching.  It was such a privilege to meet them and hear about their plans; do remember them in your prayers. 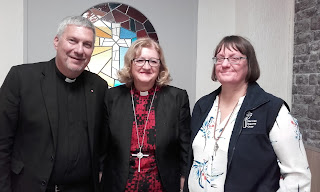 On Tuesday we headed north together to share in worship, conversation and encounter at Manchester Central Buildings as we saw in the new year with Trustees for Methodist Church Purposes (TMCP) and members of the bilingual Swahili-English congregation, and from the circuit and district.  Another great experience and good to hear of the work happening there from Rev. Ian Rutherford and Deacon Ruth Lackenby amongst others.

Back to London in the evening to be ready for the Connexional Team New Year gathering.  Along with the brand new Youth President, Michael Pryke, I led brief prayers before the team meeting which Loraine addressed.  She used the idea of early explorers struggling to navigate mountainous territories when they were only equipped with canoes for river voyages.  We too need new equipment for new terrain in the church in this generation.  The meeting then heard from from two exciting pieces of work, the Holy Biscuit in Newcastle, and church-planting in Stoke-on-Trent, both of which are finding just those new tools for new situations.  The Connexional Team work very hard in all sorts of ways - when I arrived at Methodist Church House at 8:30 on Monday morning I was surprised how many people I found already at their desks, beavering away.  Do pray for these folk as well.

Perhaps the idea of a "Methodist Hogmanay" sounds like a contradiction in terms, but John Wesley certainly valued the opportunity a new calendar year brings to renew our walk with God, so perhaps not!  Charles Wesley's new year hymn "Come, let us anew our journey pursue" (Singing the Faith 460) includes the phrase "and never stand still"... which seems to have fitted our week quite well so far!

Of course the week has also included the terrible destruction of hurricane Irma.  We continue to hold a suffering world in prayer - do visit the facebook pages as well if you can.

Jill
Posted by Jill Baker at 22:33 No comments: