Windrush - movement of the people

Last night, before speaking at the London Synod today, I went with friends to the Peacock Theatre in London to see the production by Phoenix Dance Company of "Windrush - movement of the people". I am very unversed in modern dance, so found the performances in the first half of the evening- "Calyx" and "Shadows" - intriguing but rather mystifying. 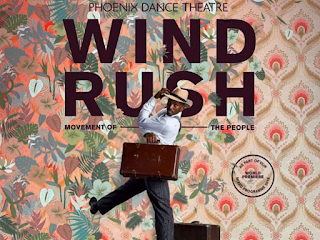 The second half, however, telling the story of the folk who came to Britain in 1948 on the S.S.Windrush (and on other boats in subsequent years) was mesmerising, powerful, vibrant and poignant. Of course this is hugely topical as the Government find themselves in disarray about their recent treatment of so many Caribbean-British-citizens who, as the soundtrack to the dance made clear, came because "you called", but often met racism and hostility from the country they viewed as the "Motherland". A brilliant scene danced by women with white paper faces, using washing lines and underwear, spelled out the unpalatable and shameful slogan often seen in the windows of rented accommodation; "No blacks, no dogs, no Irish".

The energy and passion of the dancers and the injustice and power of the story came over forcibly and the audience received it enthusiastically. If you have the opportunity do try to see it. More information here.

The Methodist Church in Britain owes a huge amount to the "Windrush generation" who, despite often receiving treatment in churches which was at best ungracious, and at worst, racist, have nevertheless shown courage and grace in sticking with Methodism and have, in many places, transformed and revitalized church life and worship. That message was clearly reinforced for me today at Synod.

JPIT are publicising the news that the House of Commons will be debating Windrush on Monday afternoon and are sharing advice on asking MPs to attend. Visit www.jcwi.org.uk for more information.

Memories of the loving, generous, hospitable way in which Andrew, Timothy, Peter and I were received when we landed as Mission Partners in the Caribbean in 1994 make me doubly ashamed of our current national behaviour. 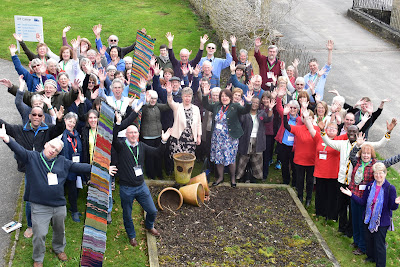 Last weekend saw 70 folk gather at Cliff College for a weekend exploring pilgrimage. People came from all over the Connexion and brought with them energy and enthusiasm, curiosity and commitment to sharing what they already knew or had experienced and openness to learn more.  The team of facilitators shared brilliantly on a range of aspects of pilgrimage - looking at where it chimes with (amongst other things) heritage, mission, justice and pain..  This latter presentation noted that physical pilgrimage is not possible for everyone - and further considered how chronic pain and disability may itself be a sort of pilgrimage.

The keynote presentation was given by Rev. Michaela Youngson who shared the lessons and insights into life which she had gained when walking the Camino in Spain with her daughter;  "Sacred wells", "Holy detours", "Arid places", "Letting go".... and much much more.  Micky was inspiring, deep and amusing all at once - we look forward to her forthcoming pilgrimage as President of the Conference. 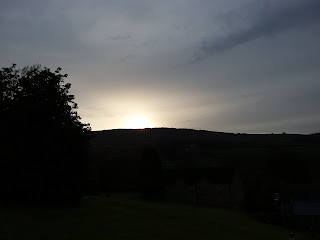 The whole weekend included a "Rhythm of Prayer", following the Five-A-Day shape.  Early morning prayer included rooftop worship on Saturday - when we were blessed with a dry morning and even a sunrise... and on Sunday around the empty cross, such a powerful feature of Cliff.

Other opportunities for prayer and reflection were offered in various ways, including the mega-labyrinth brought along by Fiona Fidgin for Saturday afternoon. 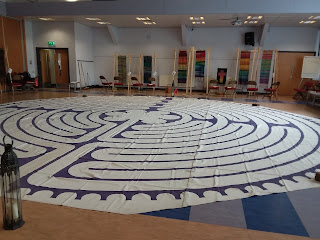 Saturday evening was given over to "Pilgrimage on a wider map" in which Rev. Dr. Stephen Skuce  conversed on stage with a number of people who have journeyed to life in Britain from various parts of the world - Barbados, Hong Kong, Cameroon and Benin.  Their reasons for coming - and their treatment on arrival - varied hugely and we were humbled to learn from Pride of his long journey (pilgrimage?) to being granted refugee status.  All participants were gracious - if only the same could be said of all our churches and of our Home Office!

At four points throughout the weekend Rev. Graham Sparkes, a Baptist minister and President of Luther King House, reflected back to us what he was hearing and what he felt was emerging of a theology and understanding of pilgrimage.  His reflections were wise and perceptive and will be made available in due course on the pilgrimage pages of the Methodist Church website. 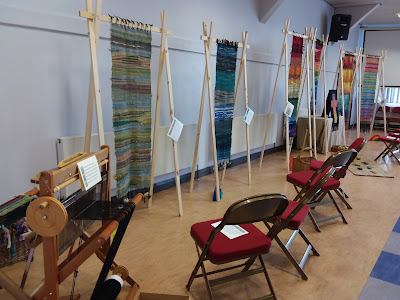 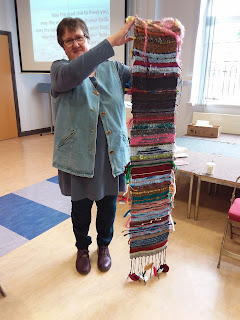 All this talking, listening, discussing and thinking was enriched and surrounded by the wonderful creativity of Ruth Sprague.  Her series of weaves on a pilgrimage theme literally encircled us in the meeting room and the prayerful work which had gone into both the weaves and the booklets accompanying them seeped into all our conferring in a mystical way.  Ruth had also brought along her loom and invited pilgrims to spend a few minutes weaving with her over the weekend - a wonderfully rhythmic, soothing activity.  The result was a fabulous textile which expresses so much of the variety and togetherness of the time.


For those with energy and a passion to do pilgrimage outdoors, several options were on offer - some chose to stop off at Tissington en route and share in the Tissington Village Pilgrimage, devised and led by Peak Park Rural Officer, Deacon Lorraine Brown.  Lorraine also led a group of 18 on the final section of the Peak Pilgrimage on Saturday afternoon.  A prayer walk around the Cliff College grounds was one of many workshop choices. 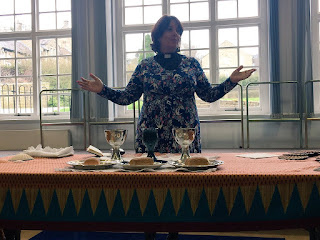 Closing worship centred around the story of two early Easter pilgrims on the Emmaus Road - the whole act of worship, which I led, was shaped by the story, and as the disciples shared their meal with a stranger, we were led by Micky in a communion which captured that sense of Jesus being revealed in the breaking of bread.

So much more could be said - and I hope it will be in all sorts of locations and events, as some of the richness of the pilgrim ethos is shared with the wider Connexion.  Look out for further reflections and report in the Methodist Recorder and elsewhere and many more photos can be viewed at  https://www.flickr.com/photos/92902340@N00/albums/72157689622947590

Meanwhile, my heartfelt thanks to DMLN for wonderful support in putting on this event - especially Dr. Tony Moodie - and to the brilliant planning group of Sarah, Lynne, Simon, John, Marlene and Tony who all worked so hard.  Blessings for the journey, Jill
Posted by Jill Baker at 11:25 No comments: