On the front of the former Bell Hotel (now Santander) is a blue plaque, declaring it to be the meeting place of the ‘Anti-Methodist Hell Fire Club, which victimised John and Charles Wesley in 1754’!

I stumbled across it while walking through Norwich with Julian Pursehouse, and others from the East Anglia District, who had never noticed it before.


Wow – if only Methodists today created such a strong reaction!  Maybe our preaching is not controversial enough?! 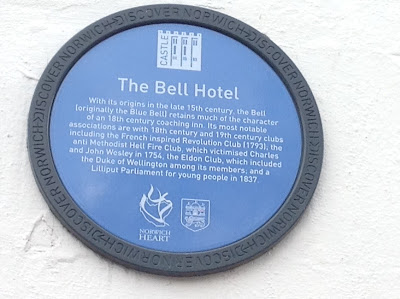 I was intrigued to know more.  Fortunately, during my visit I was given a copy of The Spreading Flame: the coming of Methodism to Norfolk, by Cyril Jolly.  The first Methodist to preach in Norwich was James Wheatley.

There is a wonderful contemporary account in a letter dated 28 September 1751:

‘For a few weeks past, there has been a Methodist preacher in this city: he preached four or five times every day; but constantly morning and evening on the hill upon which the Castle stands, when he is greatly crowded, especially on the Lord’s days; it was computed that the last Lord’s day he was attended by 8 or 10,000. The mob is thoroughly in his interest, as appeared when some young gentlemen very imprudently fired some crackers among them; when in the bustle the preacher was thrown from his table and received a slight wound in the leg. Some of the gentlemen lost their hats and wigs, and had their coats tore to pieces, being likewise much bruised; and probably a few lives were saved by rolling down the hill, the descent of which is nearly perpendicular… No worse consequences have attended this affair than the breaking of a few windows in the house where the preacher lodges. Upon this disturbance the preacher changed his discourse to the stoning of Stephen.’

The ‘Hell Fire Club’, consisting of ‘indolent, rich young men with principles inimical to government, and a determination to crush Methodism’, began to organise opposition from their headquarters at the Bell, bribing ‘toughs’ with money and strong beer to break up Wheatley’s meetings.
On one occasion a gang of seven butchers and five weavers, with blackened faces, carrying cleavers and marrow bones, banging a drum and blowing cow horns, and fuelled by alcohol, attacked the Methodists. Mob violence continued for months, resulting in damage to property and bruised and broken limbs.  Some Methodists were very badly wounded, and two preachers nearly murdered.  It is not surprising that action against the rioters was ineffective, as member of the Hell Fire Club included four aldermen and magistrates.


John and Charles Wesley arrived in Norwich on 10 July 1754, and Charles preached at 7.00am on Orford Hill to a crowd of 2,000 people. In the afternoon, he preached again to a crowd of 10,000 (John was too ill to take part).  Charles then rented a large brewhouse, on the site of an old bell foundry, and fitted it up as a chapel called the ‘Foundery’.


This must have been red rag to a bull, as it was almost under the noses of the Hell Fire Club.  Charles reported, ‘My strength increased with the opposition. A gentleman on horseback with others, was ready to gnash on me with his teeth; but my voice prevailed, and they retreated to their stronghold, the alehouse.’


What an incredible story – and how brave our ancestors in faith were in facing opposition.  If I was one of the women thrown into the river, and sexually assaulted in the streets, or the man thrown into a cess pit, just for being a Methodist, would I have the courage?


I am not suggesting we should create a riot (or am I?) – but perhaps we need to be less afraid to speak out – for justice and for Jesus.
Posted by Jill Barber at 16:07 1 comment:

A Prayer of Reconciliation

During my visit to the East Anglia District I had the privilege of a wonderful tour of Norwich Cathedral. I was really impressed and moved by the feeling of living faith in the midst of such an ancient and awe-inspiring building and tradition. 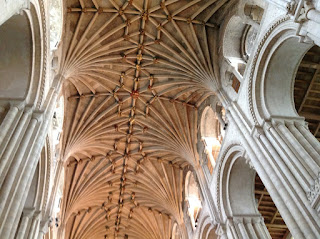 In a side chapel was this prayer, found written on a piece of wrapping paper in Ravensbruck, the largest of the concentration camps for women in Nazi Germany.

O Lord, remember not only the men and women of good will but also those of ill will. But do not remember all the suffering they have inflicted upon us; remember the fruits we bought, thanks to this suffering, our comradeship, our loyalty, our humility, the courage, the generosity, the greatness of heart which has grown out of this; and when they come to judgement, let all the fruits that we have borne be their forgiveness.  Amen.

I feel humbled and challenged.
Posted by Jill Barber at 15:49 No comments:

Faith makes every place a Bethel

On Sunday I was with a church without a building.  The people I met, in the school where we gathered for worship, were full of hope for the future. There was a vision and a heart for mission and outreach, and an energy that was uplifting and encouraging. Yet emotions ran close to the surface, even erupting at times.  For some, the pain of losing ‘their’ building was still raw.


This morning, as I had my cup of tea in bed (spoilt I know!) I was reading Paul Chilcote’s Her Own Story.  A letter from Ann Ray to Elizabeth Hurrell, written in 1769, struck me with the freshness of ‘now’.

‘His presence [is] in you, around you, wherever you are, at every time and place. Believe him in you, near you. He is, you know, “bone of your bone, and flesh of your flesh”; yea, nearer than that by far, for “he that is joined to the Lord, is one spirit with him”. Think of his immediate presence as often as you can. Speak to him in the simplest manner possible as frequently as you can. Tell him all you want, all you can do, or cannot do; but, tell it as to a present God, a present Friend who is able and willing to help you. Do not behold him afar off, in heaven only. He is here upon earth, or rather earth and all things are in him … Faith makes every place a Bethel.’

Jacob set up a stone to mark the place where he had experienced the presence of God, and called it ‘Bethel’. In the 19th century people built chapels and called them ‘Bethel’, as a sign of rejoicing and prayer that God would be in that place.
Unlike Jacob, we have the glorious gift of a living relationship with God through the risen Jesus.  We can experience his presence in a new way.  Jesus bursts open the spaces in which we try to enclose him.

Faith makes every place a Bethel.
Posted by Jill Barber at 10:55 No comments: