On Monday I spent the day in Tower Hamlets with Revd Stuart Jordan (Chair of District) and Rev Cameron Kirkwood, the Superintendent Minister.
The first visit was to Citizens UK in their London Office. Here I met Neil Jameson, the Executive Director and London Lead Organiser. I heard about the impressive work they do, bringing together groups within the community to work for the common good. If you want to find out more then look at their website here

Next, we went to the Whitechapel Mission. Here I met the Director, Tony. The volunteers had just finished serving breakfast to 200 homeless people, it had been a relatively light morning - sometimes as many as 400 come for food and to use the showers and washing facilities. One or two were sleeping at the tables. Tony explained that it is dangerous to sleep in the night so often those who live on the streets sleep during the day. Some will stay for lifeskills classes and for some there is the option of a resettlement process. Many will have charged their mobile phones before leaving.
Volunteers come from many places, many work in the city or Canary Wharf and volunteer before going to work in the morning.

We went upstairs and Tony took a book from a glass case. Inside are written names - the names of those on the street known in the mission, who have died. They may not be known or remembered anywhere else but here they are.

You can find out more about the Whitechapel mission here

A bus ride took us to Brick Lane and to Fournier Street. Here John Wesley held the first Covenant Service in what was then a French Huguenot Church. It later became a synagogue and is now an Islamic Centre. The history of this one building offers a glimpse of the diverse and changing community in Tower Hamlets.

From here to Bethnal Green Methodist Church. This church opens its doors to the community on a daily basis. I met Debbie, the community worker just as the group who had gathered for coffee were leaving. Debbie and Rod took me to see the garden.
The local people had asked if they could have a garden area at the church because there is nowhere locally for them to sit outside safely. An area at the side and back of the church was cleared and now there are raised beds for growing vegetables and flowers and a lawned area to sit out on. A fig tree is bearing good fruit and there are strawberries that gave an excellent crop last year.


We left to get the tube to another, very different part of Tower Hamlets - Canary Wharf. The contrast between the two areas is hard to describe but as we came out of the tube station into the gleaming, metallic, spacious commercial area it was like entering another world. We went to 1 Canary Wharf where we were meeting members of the Community Affairs Team of the Canary Wharf Group. The Group aims to work with the local community to provide a point of contact and also helps community groups to access funding and awards grants.


We went to the 35th floor of the building and met Emma Warden (Community and Sport), Zakir Khan (Head of Community Affairs) and Howard Dawber (Head of the Public Affairs Team). We were told of the plans for future development and also learned of the various ways in which the Group is working to support local organisations. It is good that the intention is there and that community groups have benefited from the assistance and advice given. Clearly Cameron and others have made valuable links with the Group which can benefit the wider community.
Stuart and Cameron then left Canary Wharf - I stayed for another hour, looking at the shops before going to join the District Chairs at Central Hall Westminster.
That evening Daleep and I shared a meal and conversation with the District Council. It was a great end to a fascinating day.
I left the next morning to go to Durham for the day where I was preaching and presiding in the Communion service at St John's College, also home to the Wesley Study Centre and Cranmer Hall.
On Wednesday I left County Durham again to rejoin the London District, this time leading the retreat for ministers at Belsey Manor Retreat House near Redhill. As always, I share no details of the retreat but here are a few photographs.
The final week-end of my visit to the London District will be described in another blog.

My visit to the London District began on Saturday May 17th after meetings in Church House on the Friday. On the first day Rev Jenny Impey, one of the London Chairs took me to a local farm, and woodland. The farm was the local city farm which was a popular place with families. Here children can see market garden crops growing and a variety of farm animals. All the sounds and smells of the farm were here and I thoroughly enjoyed myself!

The woodland is in the area of Russian Dock and, again it was being enjoyed by families. There were mature trees, wild flowers and even a constructed hill from which there were good views over the city.


In the evening we went to Walworth Methodist Church to enjoy an international festival I was joined here by Daleep, the Vice-President who was also visiting the London District. The evening began with food provided by the different cultural groups: Hindu, Philippino, Chinese, Nigerian, Zimbabwean and Ghanaian - it was a magnificent feast - Could we call it fusion catering?


After the eating and a lot of photographs we moved into another hall for the entertainment, each group having 10 minutes to perform. There was singing, dancing, a demonstration of lantern making and a lot of laughter and fun. 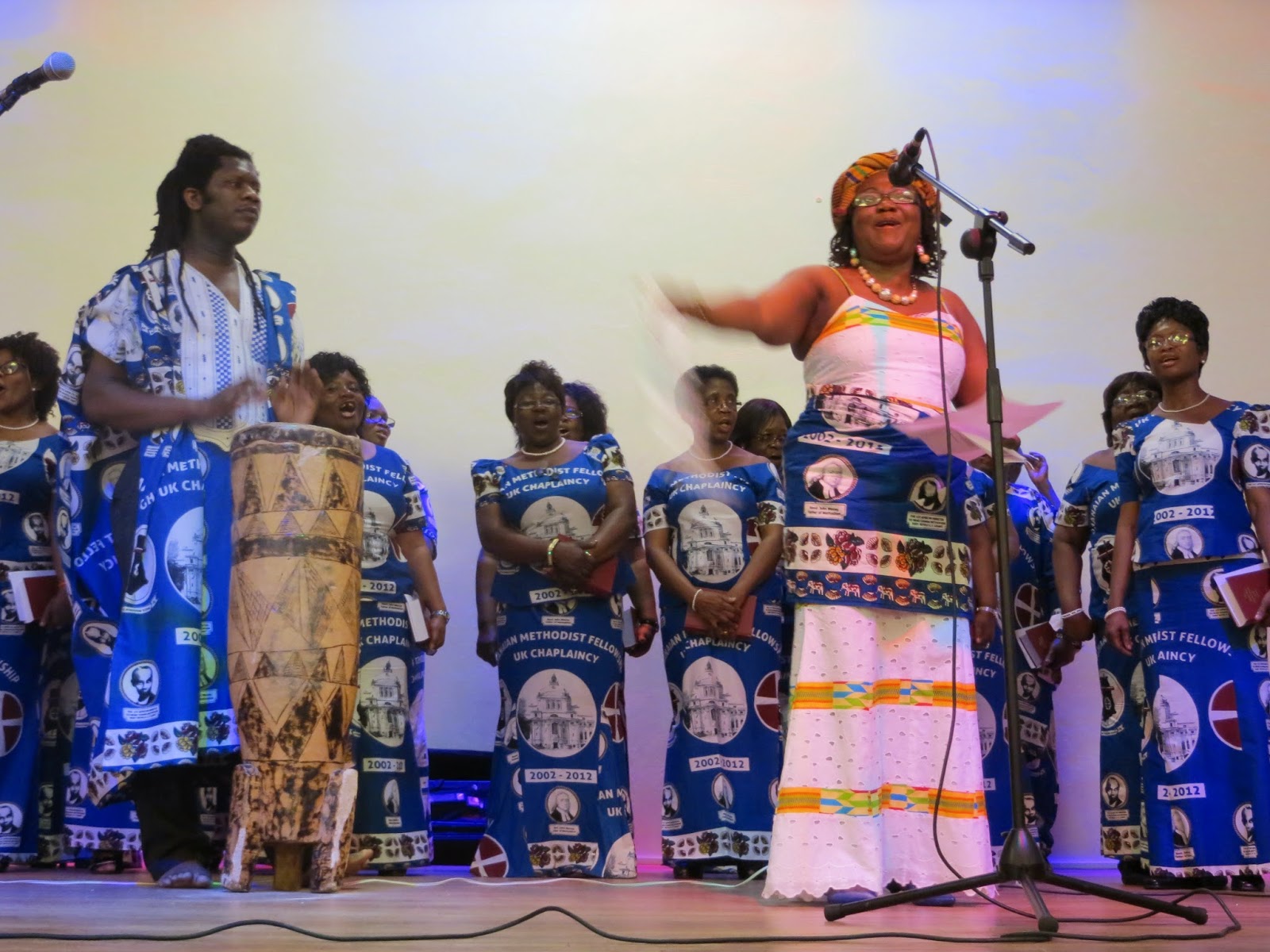 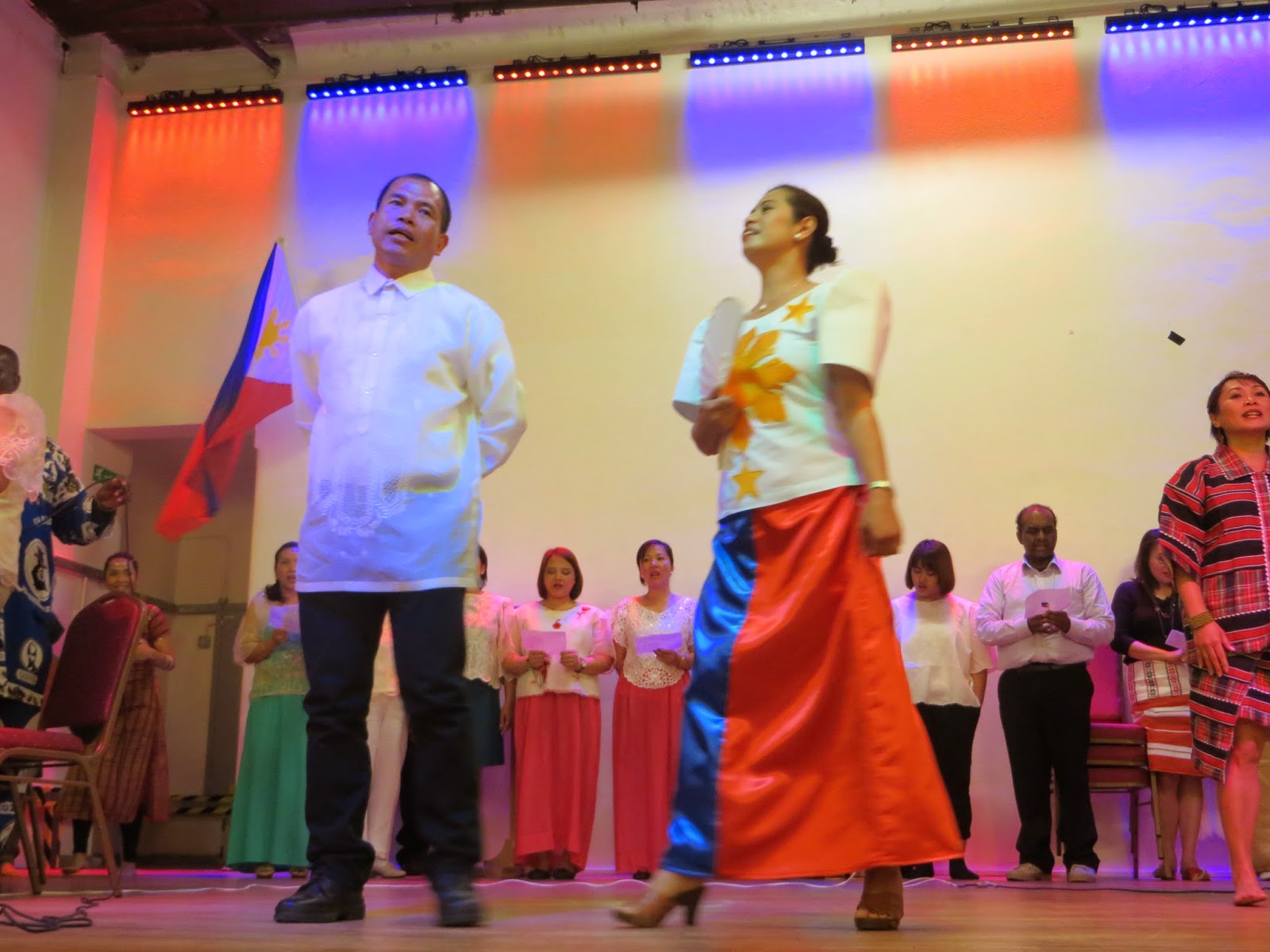 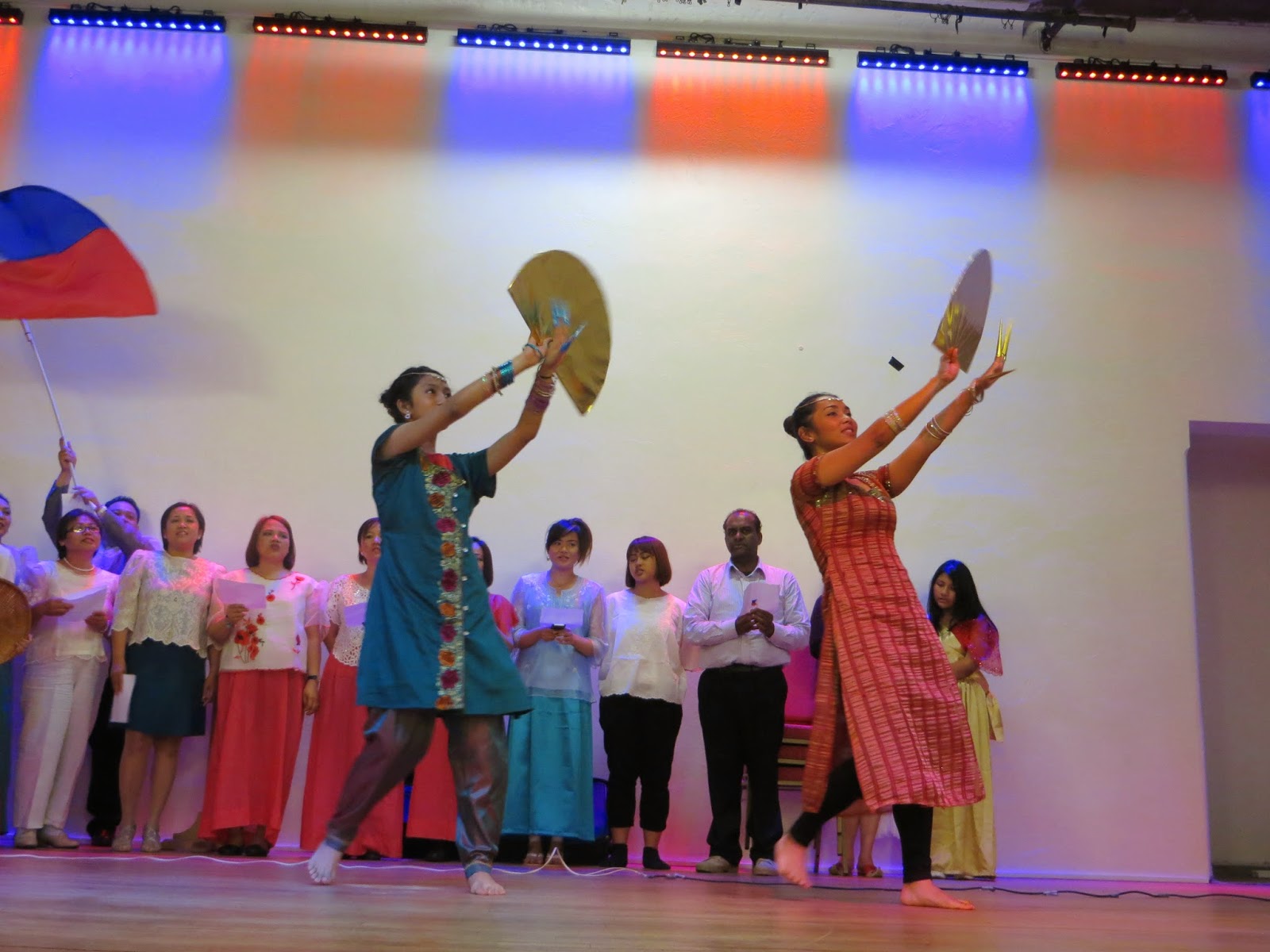 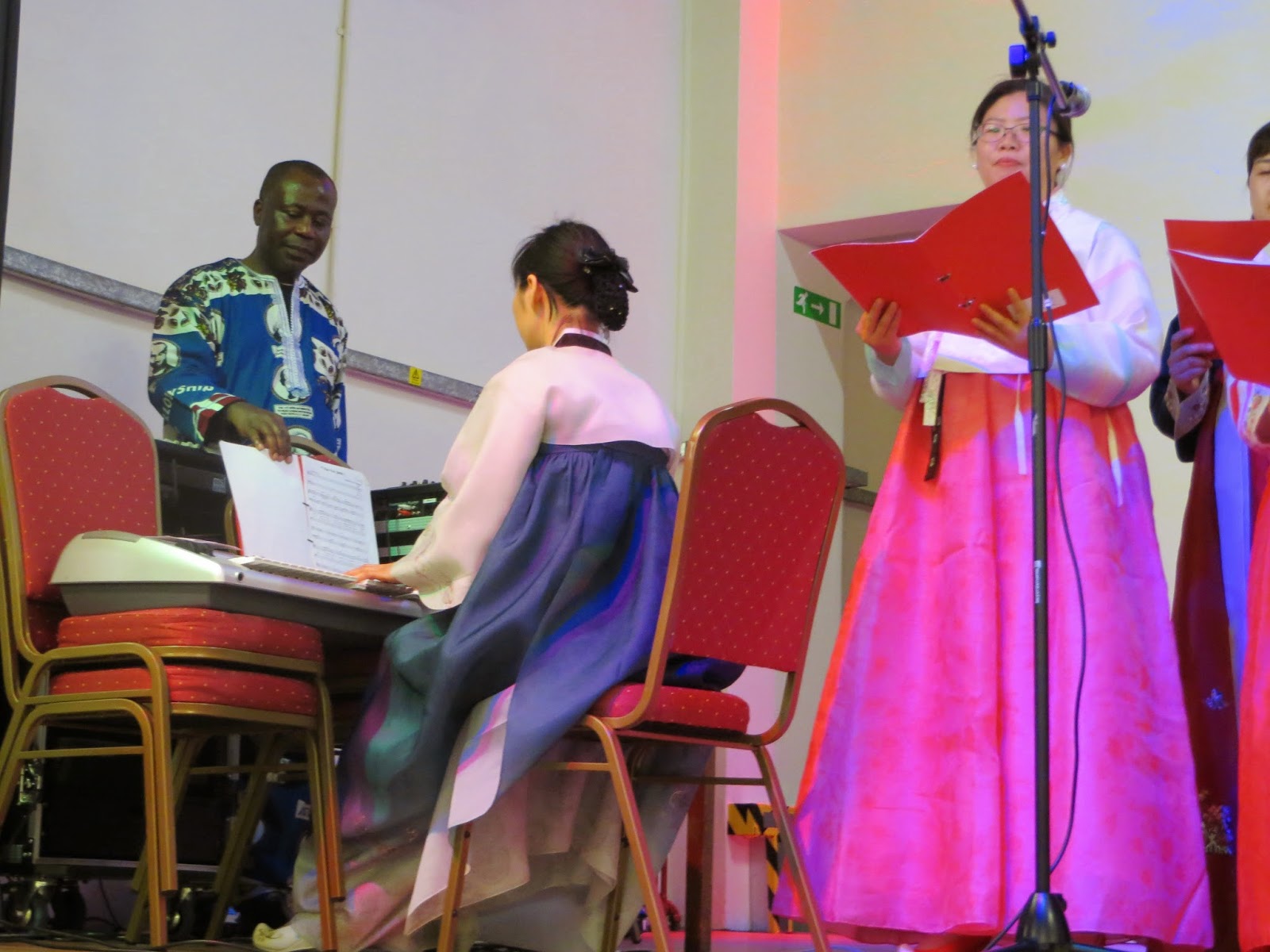 This was the first time the fellowship groups had joined together for a festival - I hope it is the first of many.
On sunday morning, Jenny drove me out from central London to the outer part of the District. We went into Surrey to Warlingham Methodist Church. In this area which is somewhere between suburban and semi-rural Warlingham is a church serving the local community and with strong and good lay leadership it is growing and thriving. The service was led by a worship leader and an excellent music group. The young people participated fully and I preached.

As I left the church I talked to a man sitting on the wall, reading his Bible. He had been one of those at the front who had been invited to the church. He told me how much his faith meant to him. I thought how much was shown simply by reading the bible in a public place.

The Church has a monthly Messy Church and last month 96 children arrived, there is a youth group and several other fellowship groups. During the service five people were called to the front and the congregation were asked what they had in common, several suggestions were made, all correct but none the answer that was being sought. Five others were then invited to come forward in order to make five pairs. Among them were a mother and daughter, a son and his father, a young woman and a male friend, a grand-mother and her grand-daughter - what the original 5 had in common was that each of them had invited some-one else to come to the church who was now a committed worshiper. A powerful and apt illustration of what we all should be doing.
From Warlingham we travelled to Whitehorn Avenue Methodist Church, where they were celebrating their anniversary. We joined them for a roast lunch and for conversation.
We returned to central London and I spent some time talking with members of the District Youth Board who were meeting in Central Hall Westminster. 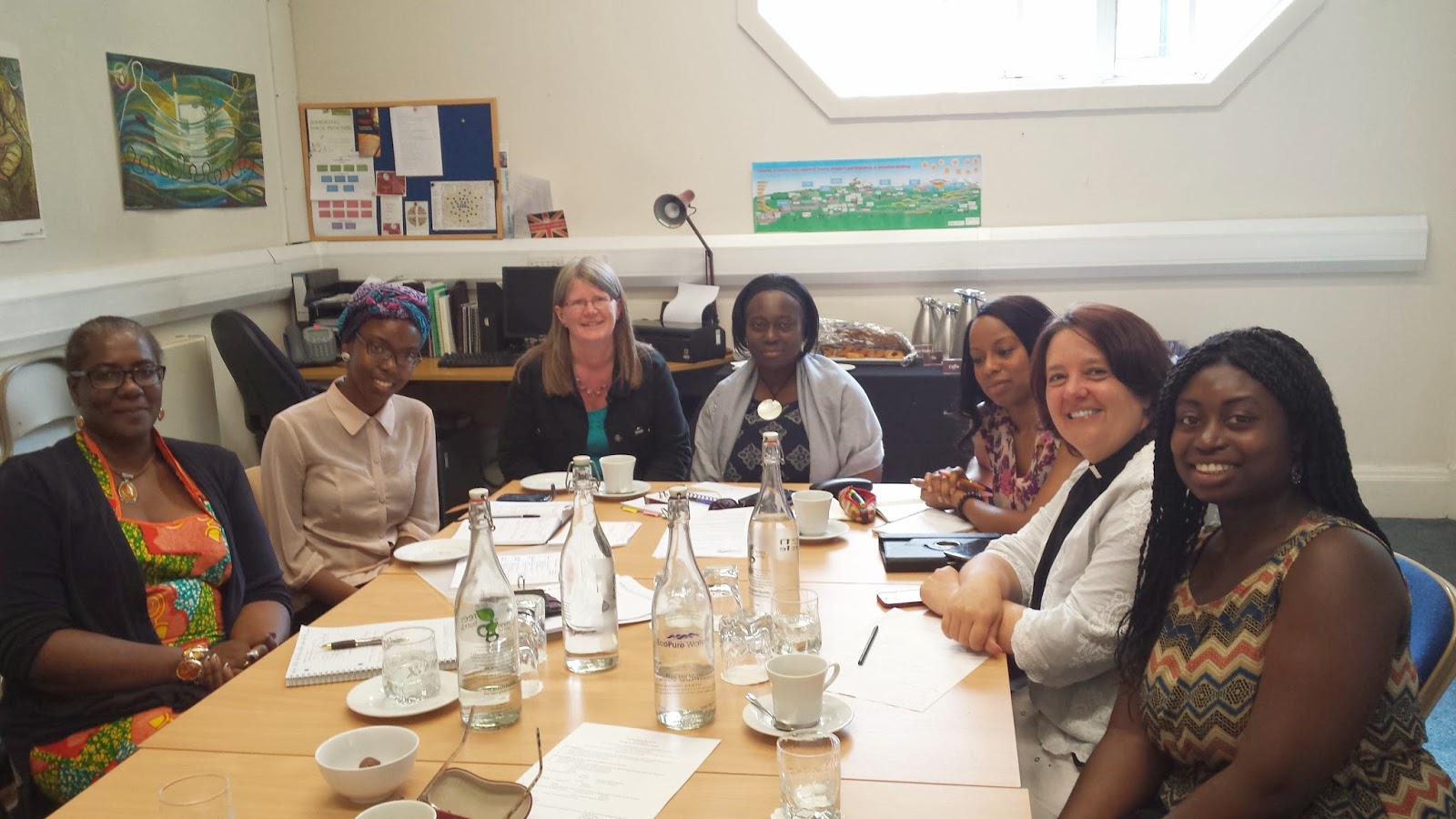 On Sunday evening I joined Daleep again as we were both participating in the ordinands testimony service in Wesley's Chapel. I was invited to preach and Daleep brought greetings to the ordinands and also to those candidates who had been accepted for trainingand new Local Preachers. Among the ordinands was one who had candidated from the Darlington District, it was good to be with him on this occasion.
On Monday I was to visit the Tower Hamlets area and it was another full day  - so full that it demands a separate blog.

I visited the Bolton and Rochdale District on May 10th and 11th. It was a short visit but packed with interesting things.
On Saturday I went to the District Synod. The Chair of District was on sabbatical leave so Rev Ron Hicks was in the chair. It was good to see Ron as we had served together in the West Yorkshire District. In the second part of the morning I had the opportunity to speak to the Synod and to speak with individuals in the breaks.
Synod met in Christ Church (Farnworth and Worsley Circuit) which is a Methodist/URC LEP. 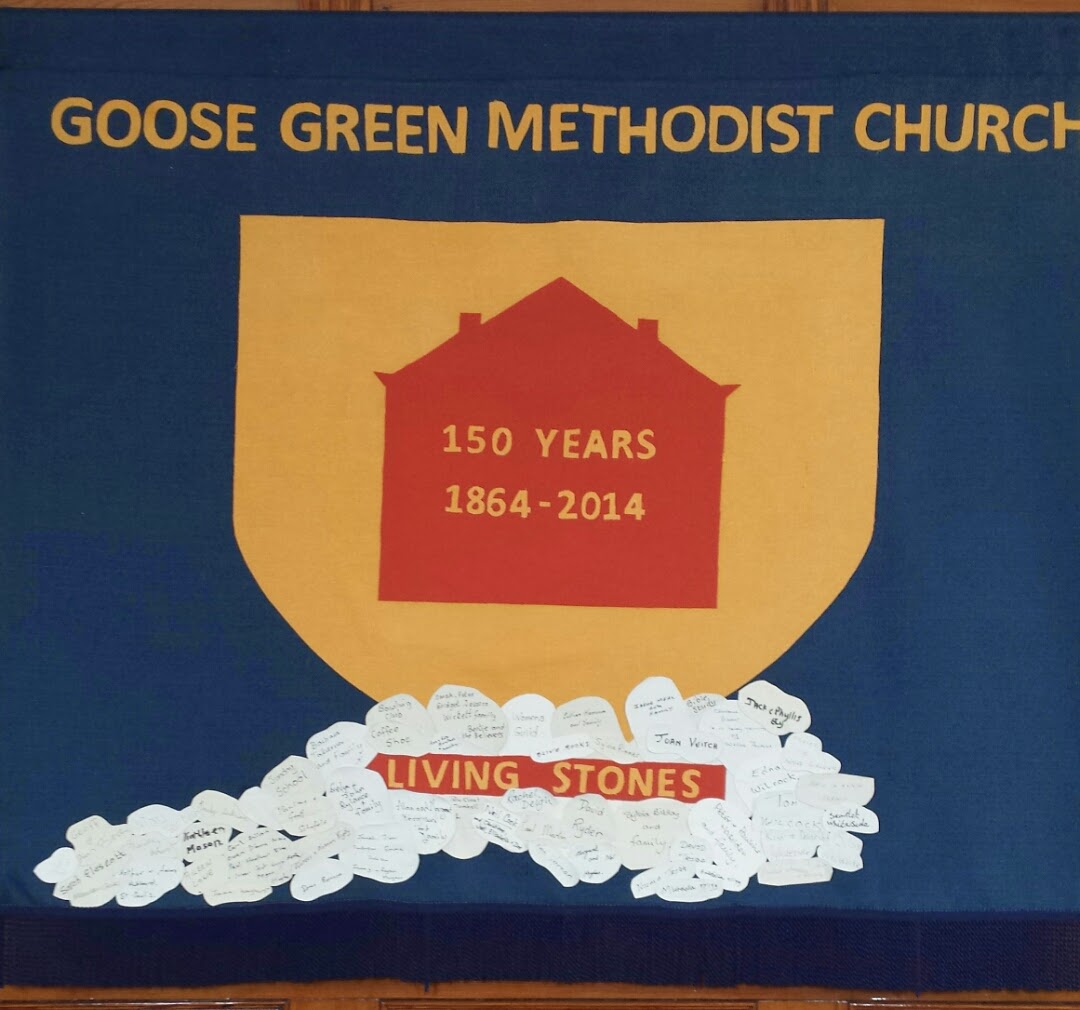 In the evening I met with the staff of the Wigan Circuit. I was staying with the Superintendent Minister, Rev Rachel Deigh and her husband, Rev. Sylvester Deigh and they provided a wonderful meal for us.
Sunday morning began with worship in Goose Green Methodist Church, Wigan. The church is celebrating its 150th anniversary year and I was invited to preach and talk to the children. They have taken the theme "Living Stones" for the anniversary year and before I left I wrote my name on a "Stone" to be added to this banner.

In the afternoon I attended a service of thanksgiving for 146 yearsofMethodist witness in Billinge. This was the final service in Billinge Methodist Church and it was well supported by the circuit - the church was packed. Our thanksgiving included a poem written by the oldest member, whose name happened to be Ruth. It was a poem that gave thanks to God for faithfulness through the years and ended by looking forward to the future in hope and in the confidence that God is always at our side. The sermon was preached by Rachel and it was my privilege to lead the congregation in prayers of intercession and in an act of commissioning and sending out. 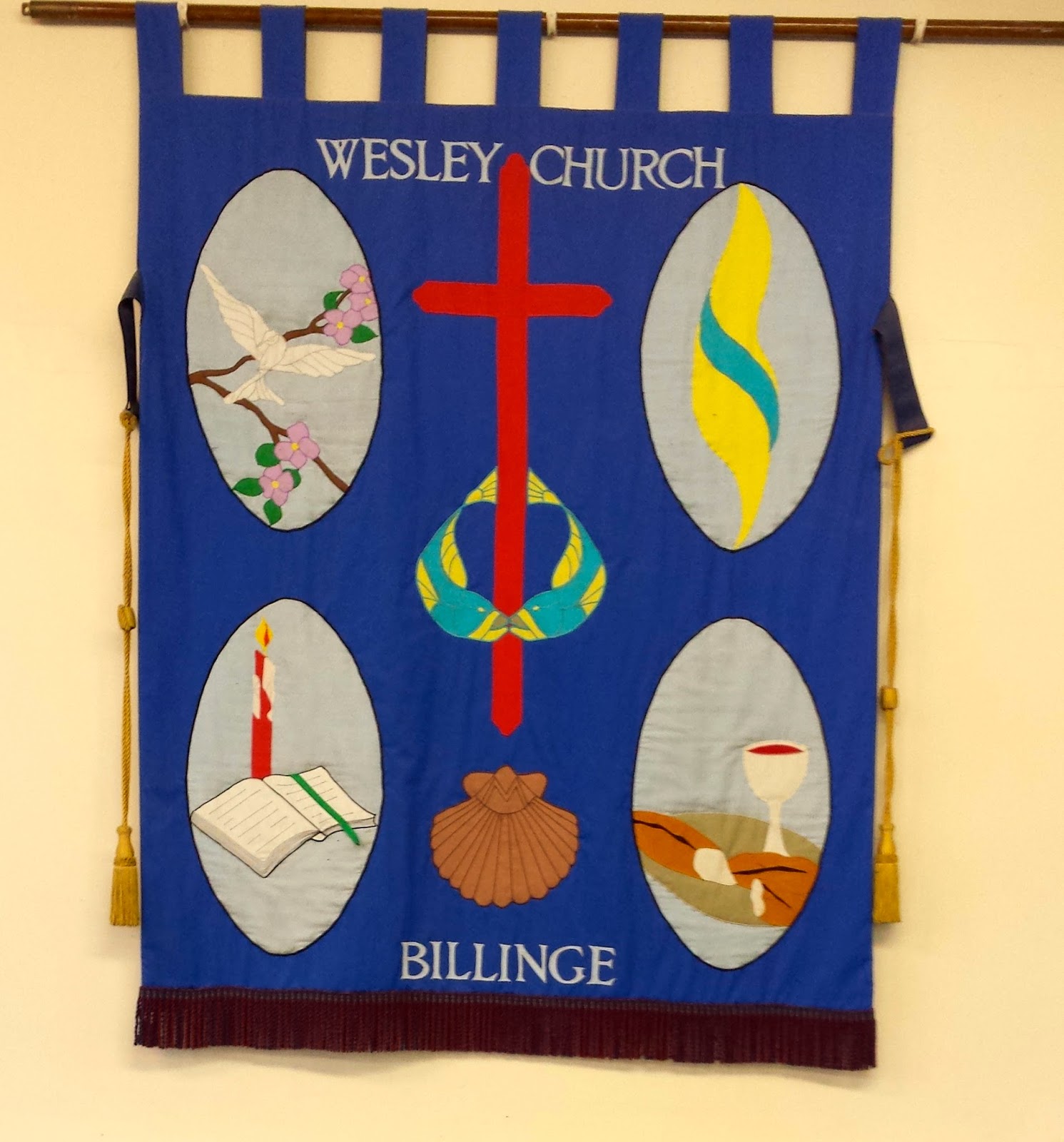 Next we went to Thrum Hall Methodist Church in Rochdale for the District Ordinands Testimony Service. There was just one ordinand, Helen Johnson,who the District has commended for ordination at Conference this year. It was a special occasion and special for me because Helen had candidated from the West Yorkshire District when I was a member of the District Candidates' Committee. I had the honour of preaching in a service that was truly inspirational.


After the evening service I drove home to Darlington and the next morning travelled to the District Chairs' Retreat. I spent the following 4 days in the company of good colleagues and friends being led by Professor Morna Hooker and taking time to be close to God. As always, I do not include details of the retreat which remains private but I do share some photographs of the lovely countryside around the retreat house in East Anglia. 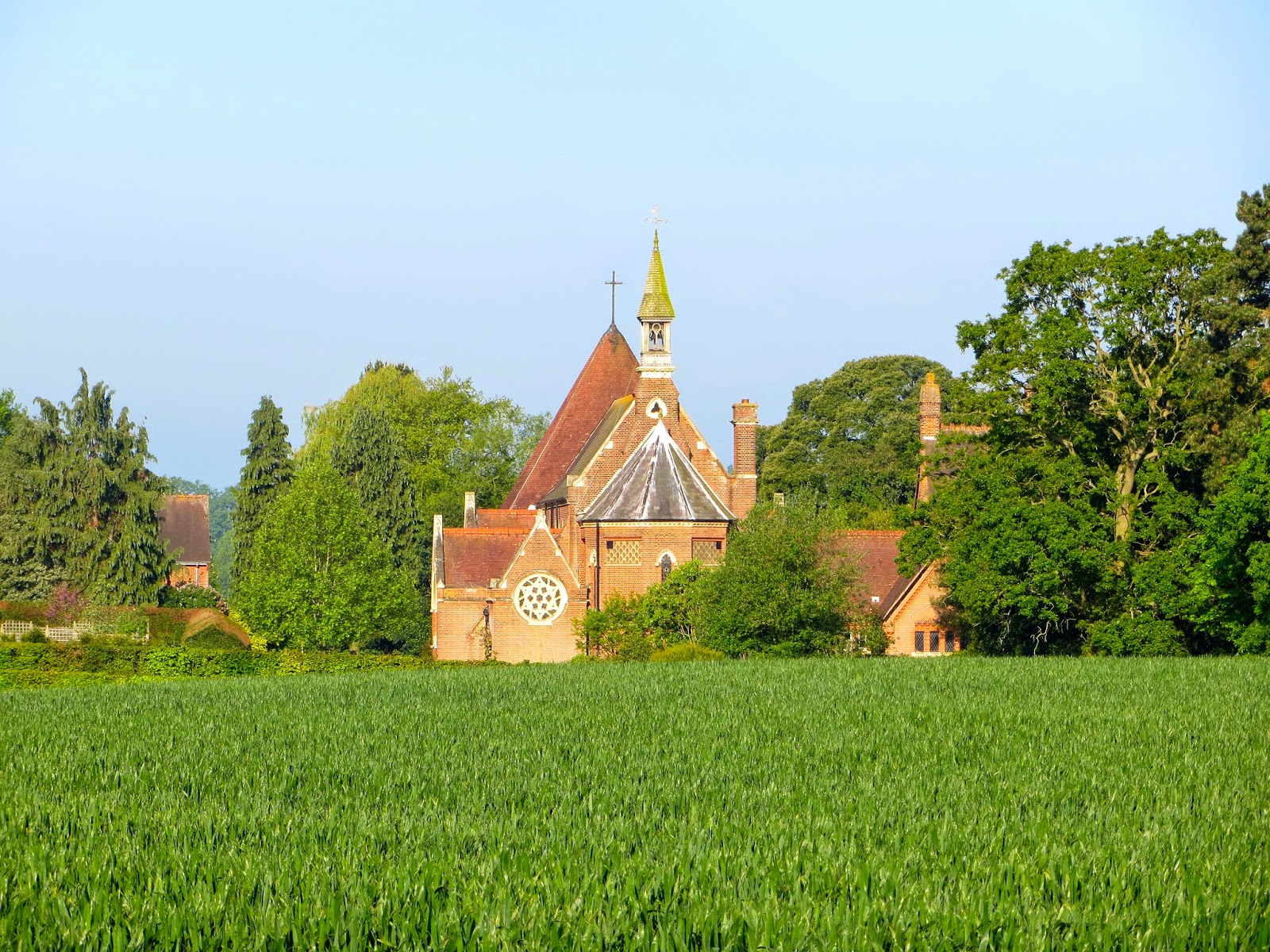 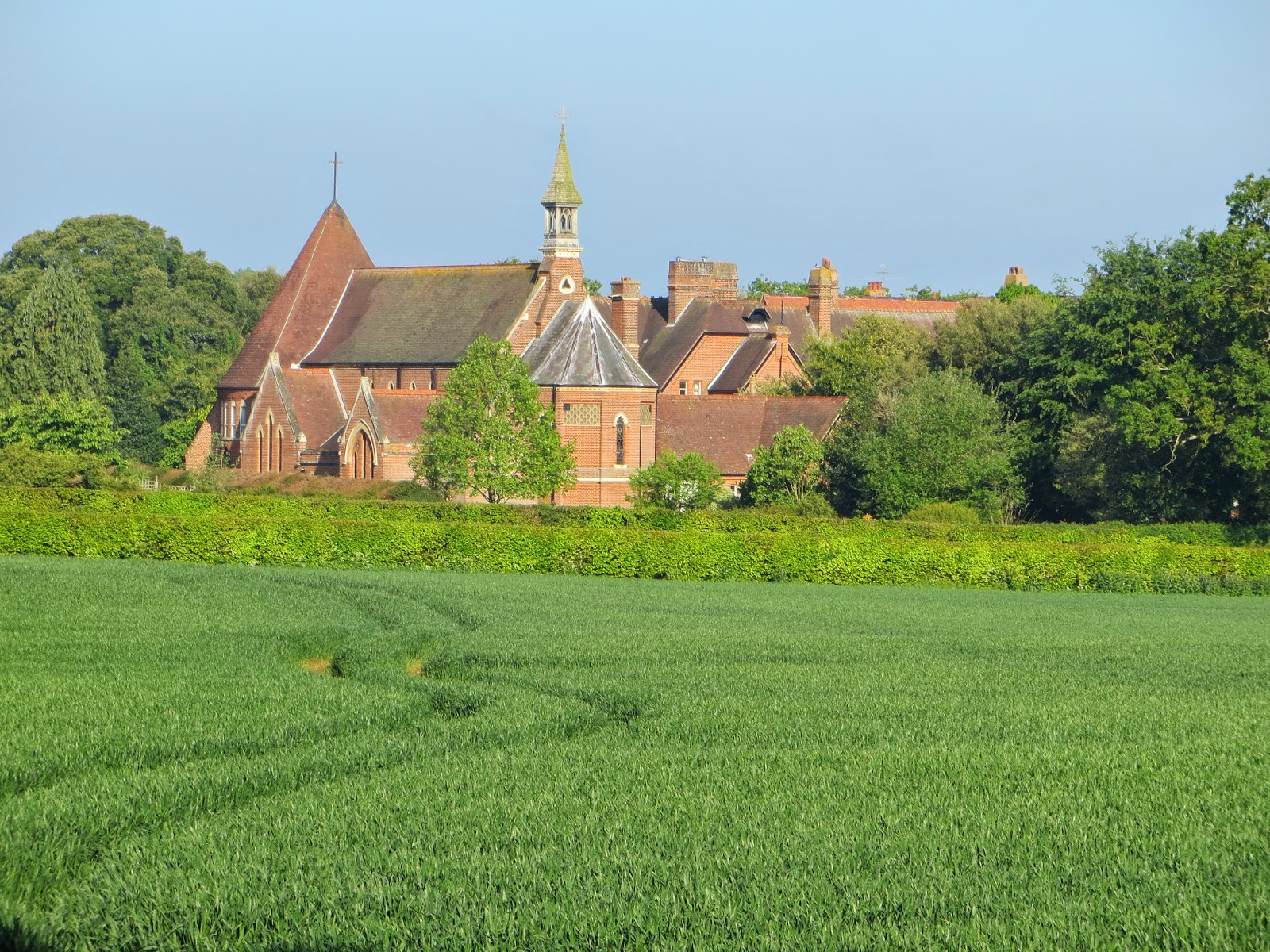 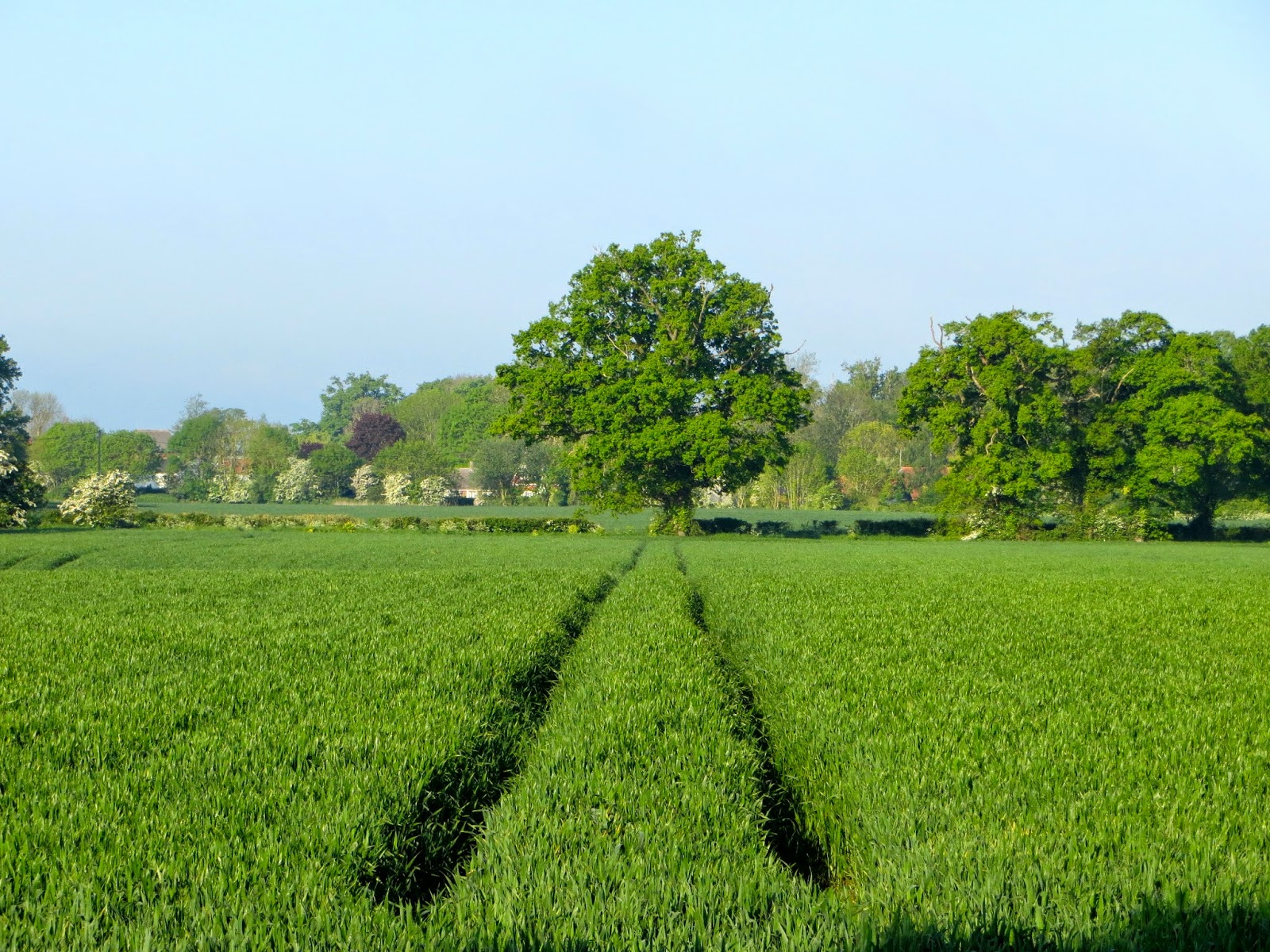 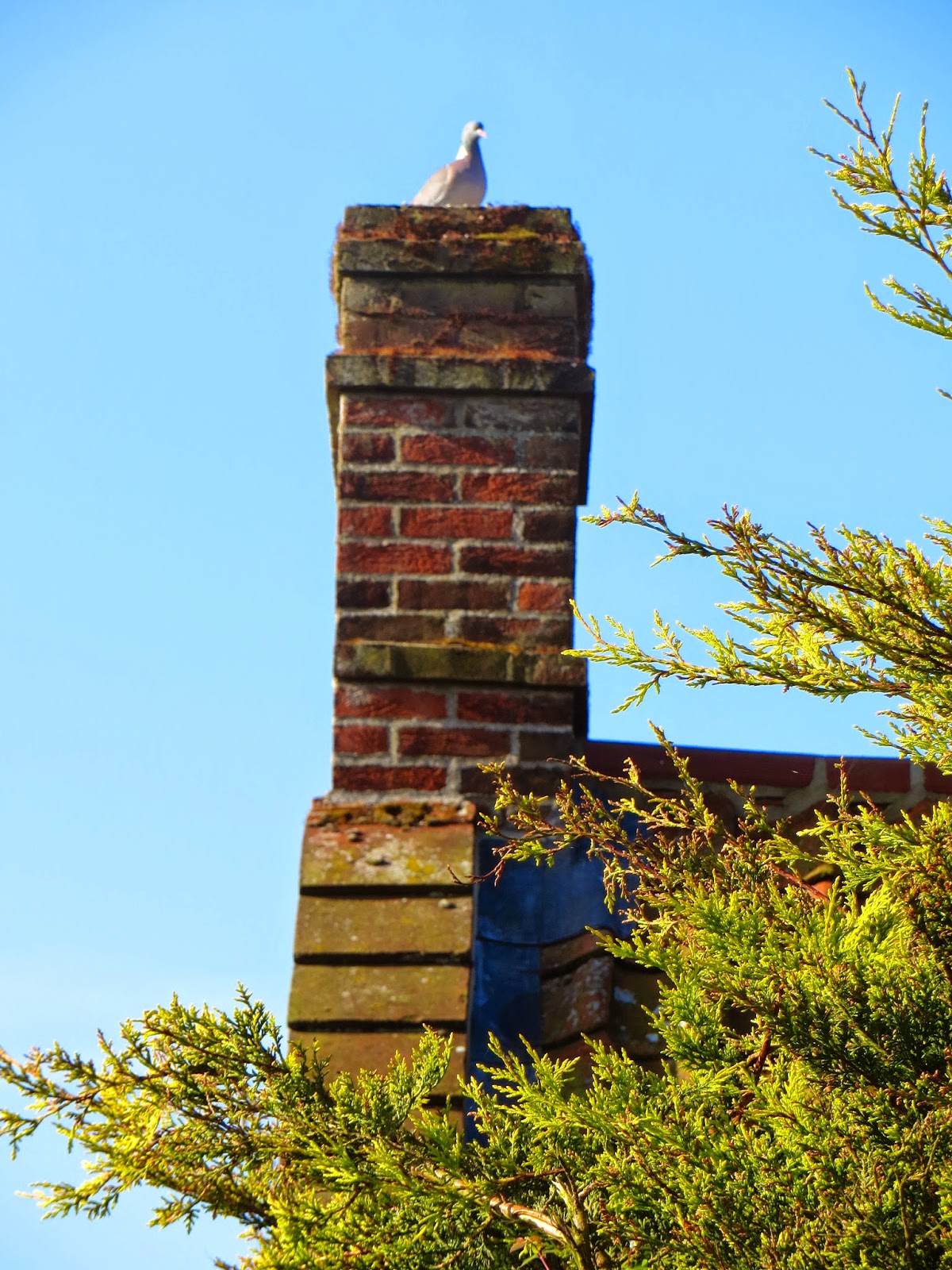 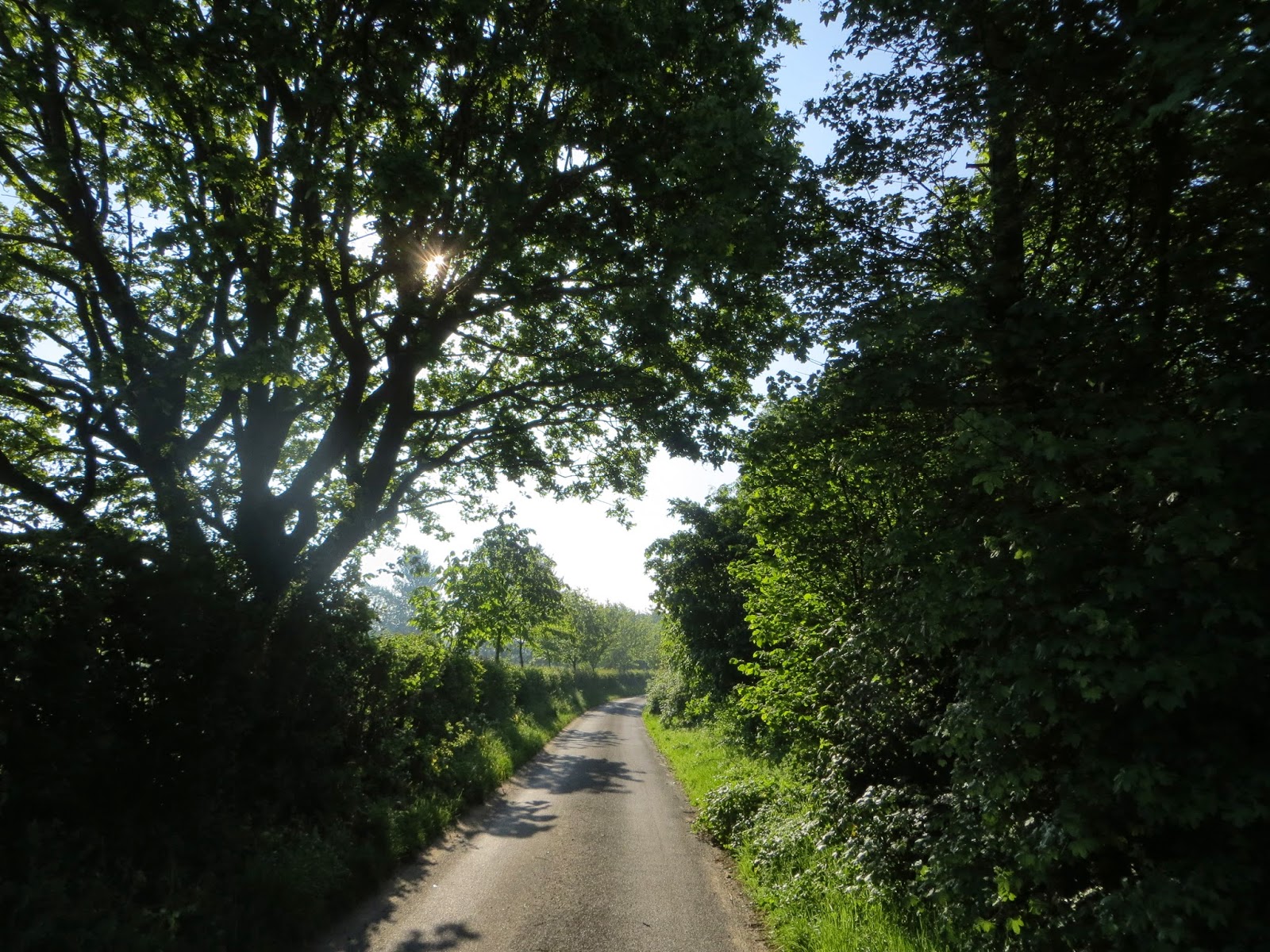 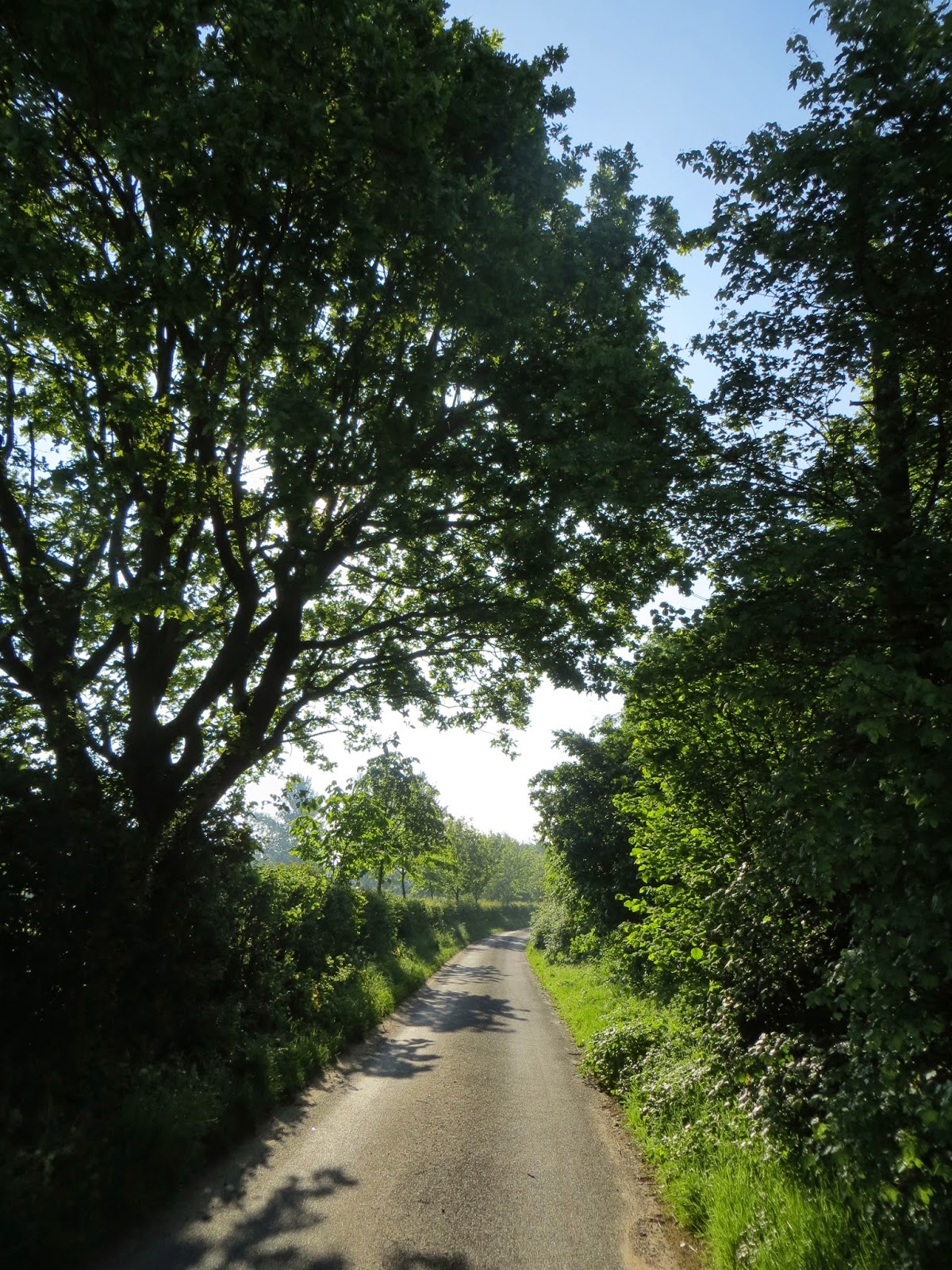 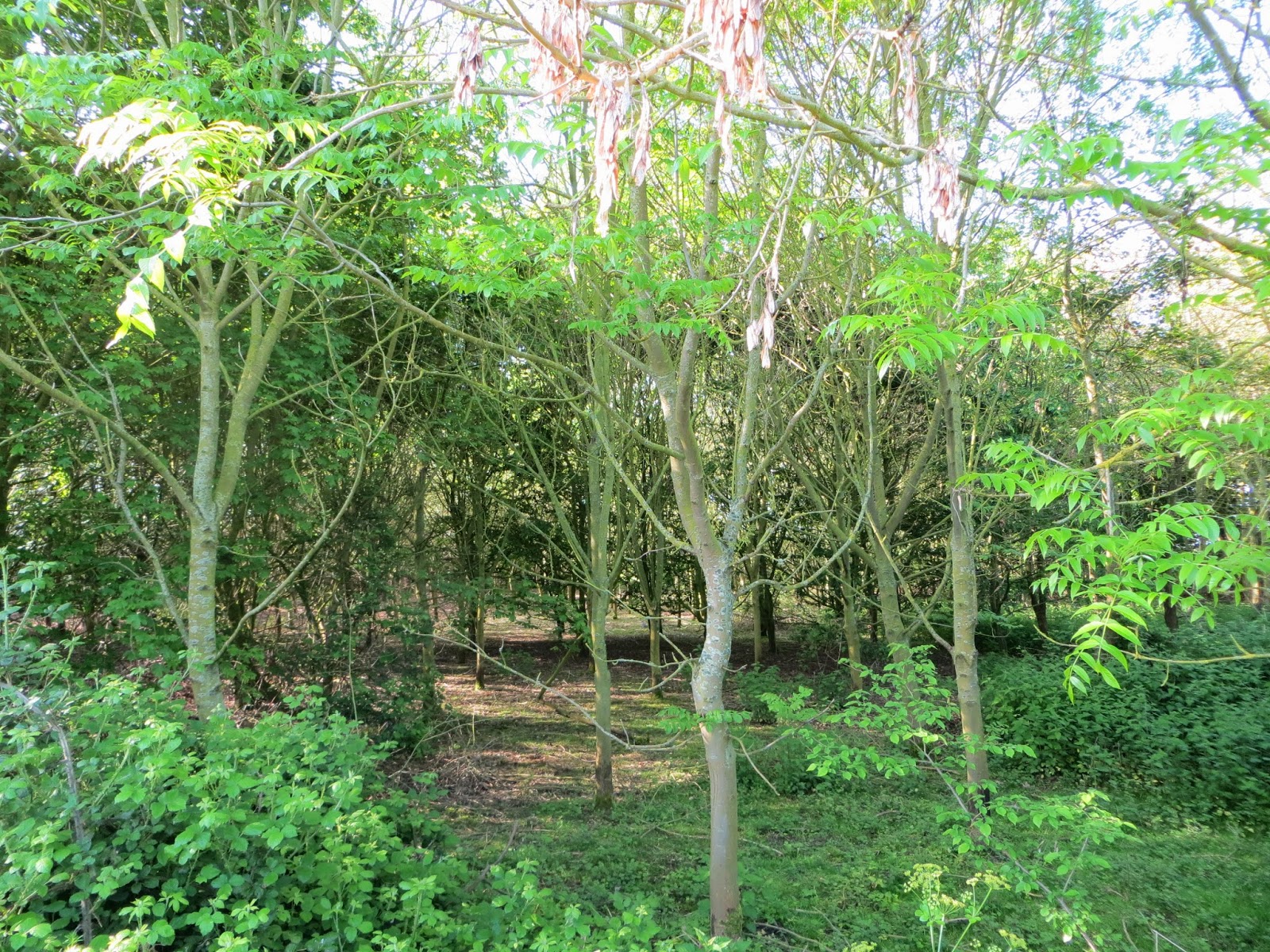 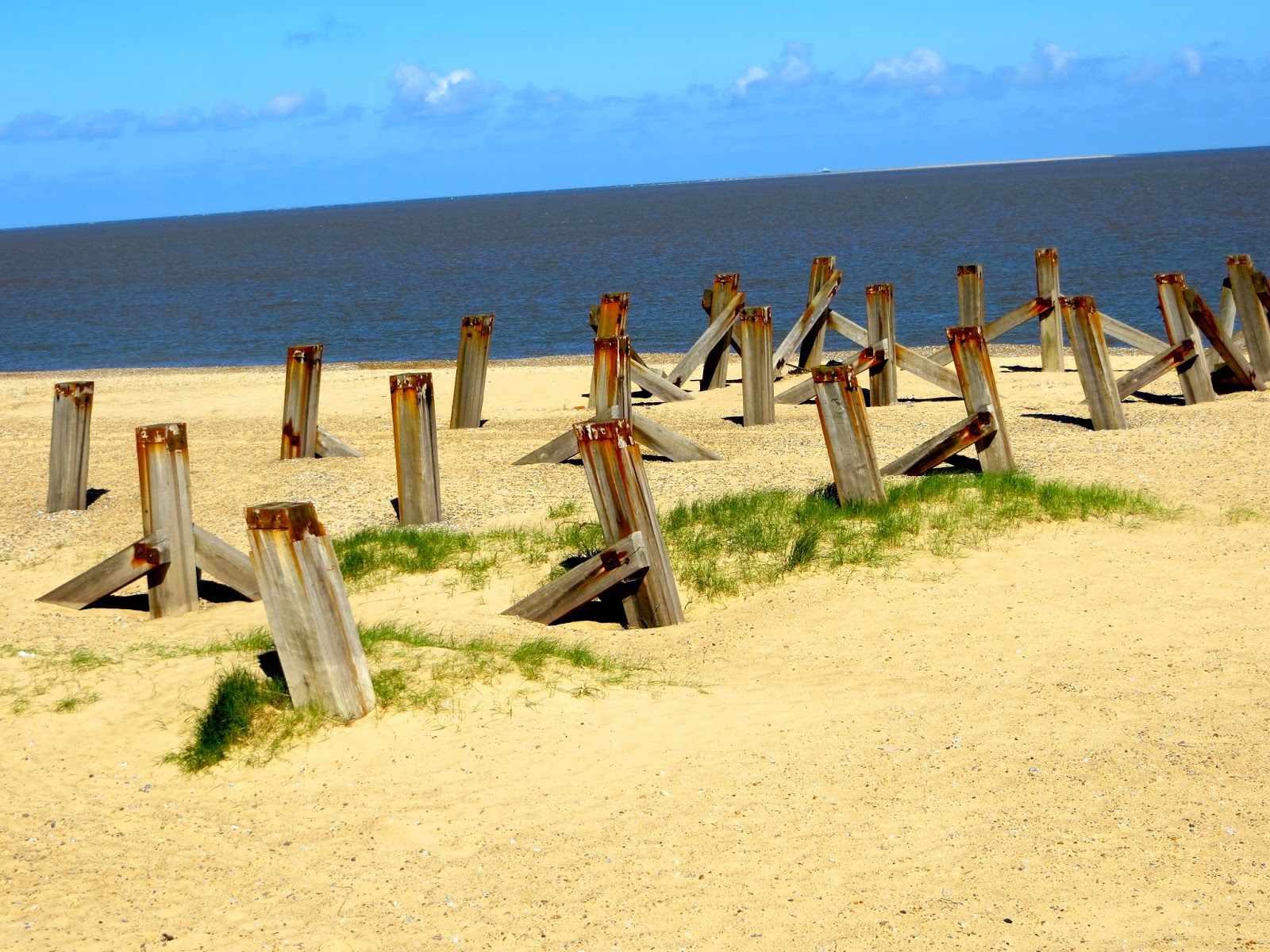 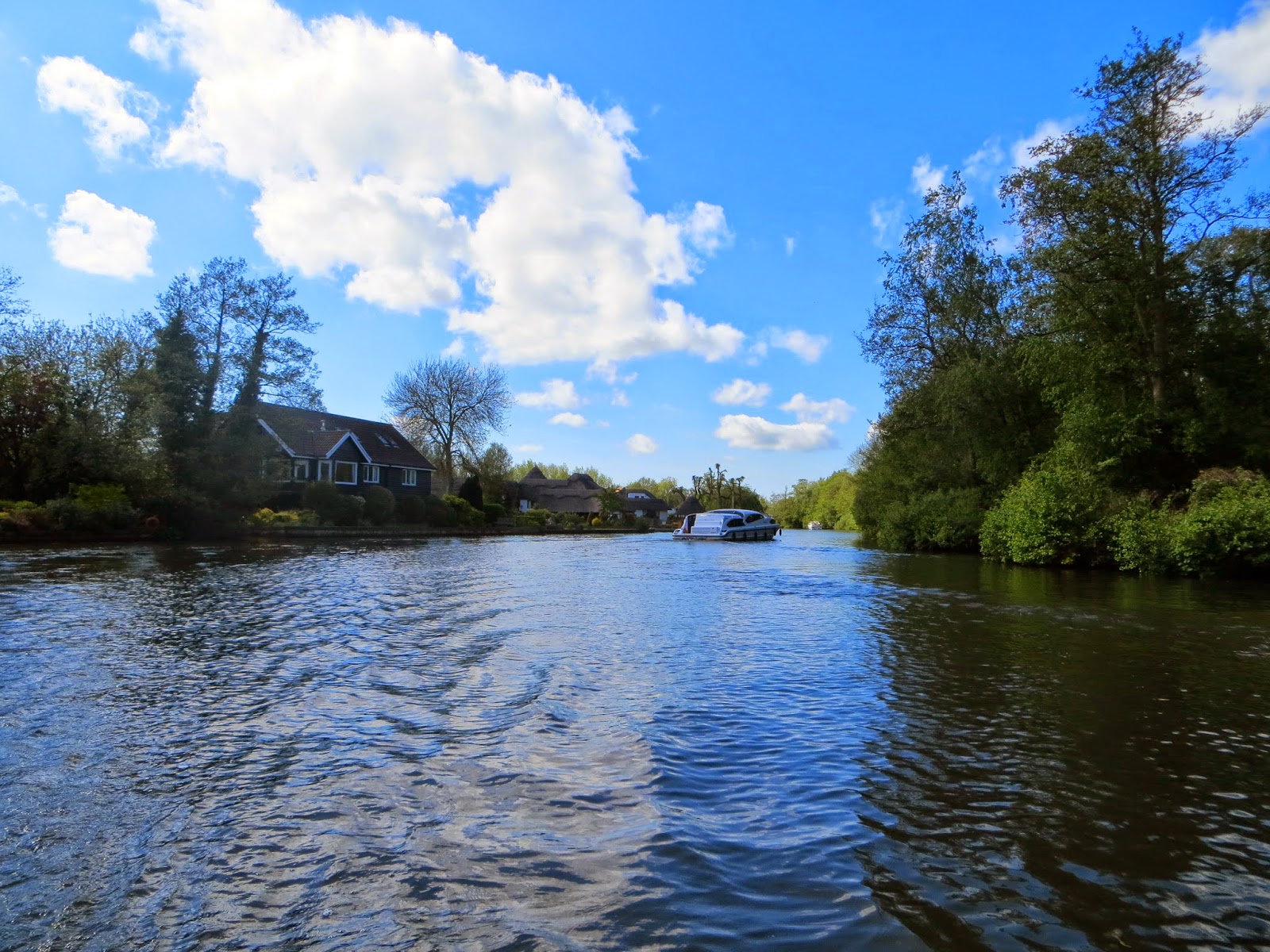