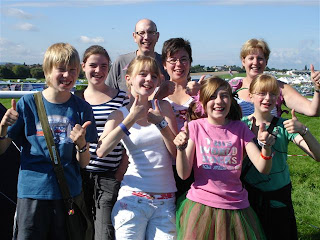 Last weekend was spent at Greenbelt the Christian music and arts festival which for the last ten years has been held at Cheltenham racecourse.

It was my first visit there and I had been encouraged to think about going by the young people of my own Church at Monton (pictured left with Liz and Clive Nulty and Anne Huddleston) who had decided to camp. I am much more nesh (a Northern expression) and plumped for a local B and B!

Methodists were well represented and in addition to my predecessors Ruby Beech and Dudley Coates I was pleased to meet up with Karen and Melvyn Kelly and their young daughter Naomi (left).
Greenbelt attracts about 20,000 people of all ages and it has a very welcoming and safe feel about it - even the local pirates are friendly (Colin Smith pictured below in alternative liturgical dress).

The range of activity on offer is amazing -from African drumming to Gregorian chanting (which was so popular I couldn't find a place on the floor). On Saturday afternoon I went to an excellent workshop on theatre directing led by Esther Baker who produces plays with prisoners.

The talks and debates were equally diverse and I enjoyed both Joel Edwards of the Evangelical Alliance and John Bell of the Iona Community - stimulating and well earthed.
Four Christian MP's from different parties were interviewed by Simon Mayo and spoke of how their shared prayer fellowship had enabled them to produce a report on wellbeing in society earlier this year- a positive Christian contribution to the ongoing debate, which arose out of a concern that the Church was too often seen as being negative in its criticism rather than offering constructive alternatives.
Performers from Beth Rowley and Jose Gonzalez to yFriday held the Mainstage each evening whilst elsewhere you could sample a couple of different bands or performers every hour of the day or night so it seemed.
Worship centred on the Communion service on Sunday afternoon but there were many other opportunities to experience a rich variety of prayer and more experimental worship, including a 6 am sunrise service - attended by a goodly number according to early risers Ruby and G

arry.
The whole event is well organised and staffed by helpful volunteers; there are good partnerships with Christian Aid and others. There are many fair trade and ethical trading stalls to sample and buy from - as well as a good selection of eateries.
The verdict from our own young people was clear - they all wanted to go again next year!

The crowning of the king! 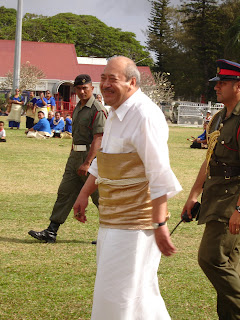 It was a great privilege to be asked to represent our Church at the Coronation of King George Tupou V in Tonga. Four of us went together - Myrtle (my wife), Chris Elliot (External Relationships Secretary) and Steve Pearce (Asia and Pacific area sec) to spend time with the Methodist Church in New Zealand and then on to a week in Tonga at the beginning of August.

Tonga is a beautiful island 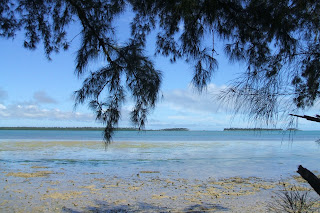 and as we arrived there was a real sense of excitement as people were returning from all over the world for this special celebration.


The Methodist Church has been part of Tongan society since the first missionaries arrived on the island in 1826. and been the 'main denomination', almost like a state Church. The previous King was a local preacher and many of the royal family are committed members of the Free Wesleyan Methodist Church

There is normally a year's mourning before a new king is crowned but the period this time was longer. Part of this was due to some riots months ago wanting more democracy - the king has appointed a privy council and there are already signs of change that were welcomed by those we spoke with. The press in New Zealand were fairly negative about the Coronation due to the lavishness and high cost of the week's celebrations. 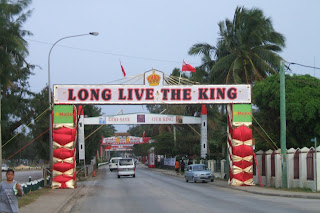 However we found the local Tongan people excited and wanting the coronation to be as good as it could be...as some said it will be the only one we share in. 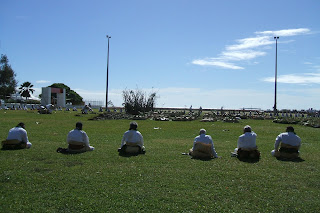 There was the traditional Kava Installation Ceremony where the new king was honoured by the nobles and installed into the tradtional title of King Kanokupola making him the 23rd holder of that title as the head of a dynasty which was founded in the 17th century. The nobles all bring gifts and the picture shows all the pigs and food which was presented to the king.

The Coronation was held in the main Methodist Church in the capital Nuku'alofa with over 1000 people i n attendance. there was royalty from around the world, lots of dignitaries....and us! 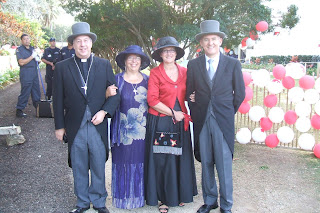 We were told just as we left London that it was top hat and tails so we had to hire these in New Zealand and the photo shows how wonderful we looked!


We had seats on the front row and saw the anointing, crowning and communion but couldn't take any photos. The new King, George Tupou V, looked very elegant. There was a lovely moment at the height of the coronation two small page girls (both royals) were so bored they were changing shoes with each other right in front of us! 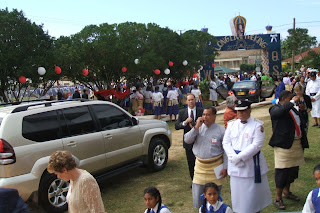 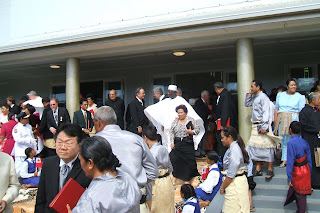 The banquet was held in the Palace and we walked there amid the thousands of people li9ning the streets.

We had a wander around the Palace 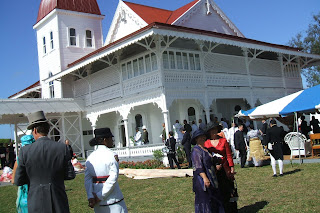 and suddenly Myrtle turned round and was face to face with the king...so she started chatting him up and we managed to get some good photos. 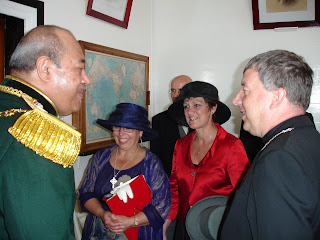 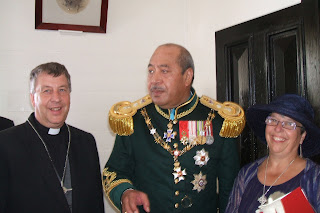 The tables at the feats were literally groaning with food - all laid out and covered with young women by each table wafting away the flies. Each tables of 10 people had at least two roasted pigs,lobster, octopus, yams, meats, coconuts, salads, fruits and so much more. 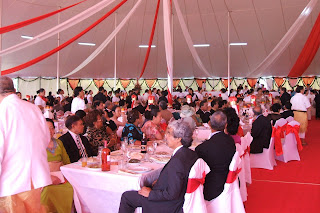 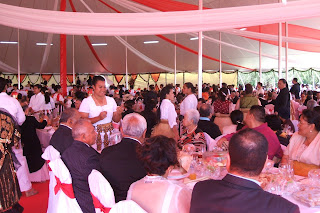 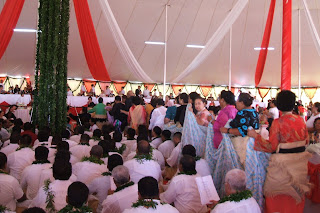 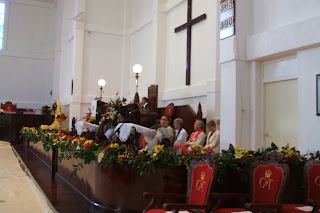 The whole week we were there we were treated like royalty ourselves by the Church in Tonga. For them it was a very special statement that the British church had sent their President to be with them at this special moment in their nations life. Please remember the people of Tonga in your prayers and for their new king that he will rule with love, justice and integrity and pray especially for the Methodist family there.....(day 25 in the new Prayer Handbook)

Posted by stephen poxon at 11:09 No comments:

Coronation of a King

Sorry to have been quiet for a while but I have been out of the country for over three weeks. I have been at a most memorable event in Tonga representing the Methodist Church at the coronation of the new king of Tonga, George Tupou V. It was a real privilege to be there and was made even more special for me as I was asked to preach at the Coronation Sunday Service. We have been hosted by a lovely family Hoi and Nunia Mone at Tupou College - their son in law plays for the All Blacks so we watched with real joy when they thrashed the Wallabies in the tri-nation series!

I have lots of pictures which I will post, next week with a more detailed accpunt of Tonga, when Myrtle and I return home. We are in Palm Springs, California at the moment having a holiday on our way back to Preston - and it is hot at an average of 110!!
Posted by stephen poxon at 21:16 1 comment: 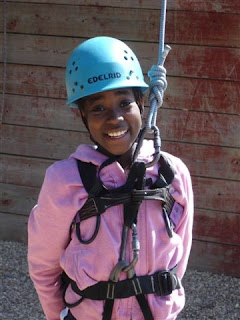 Abseiling, quad-biking, dragonboat racing - these were just some of the activies available at the PGL camp in Weymouth which was the setting for this year's ABMY Conference.

The Association of Black Methodist Youth Clubs is celebrating its tenth anniversary this year and it was great to see 130 young people enjoying themselves in a diverse programme of worship, activity, discussion and fun!

Their ages range from 12 to mid-twenties and most of the groups came from Churches around London though I was pleased to meet one young fellow Mancunian.

The Conference sessions were ably chaired by Jenni Codrington the outgoing AMBY President; Rachel Coates was there from the Methodist Youth Executive to explain the Methodist Church's new Youth Participation Strategy and encouraged members to become involved in it.

It was good to meet up again with Winnie Gasa who had spoken so helpfully at the Methodist Conference on gang violence in inner-city areas. ABMY members were given the opportunity to talk about the Church's response having listened to Edward Johnson, whose brother Edvin was brutally killed outside his home only a few months ago. Edward spoke with great honesty about his own struggles in trying to deal with what had happened - how strong natural urges to want to take revenge were in conflict with what he believed God wanted.

The ABMY has already stimulated a resolution to the Scarborough Conference which means that knife and gun crime - and all the social and spiritual issues which surround it - are firmly on the Church's agenda.


We know that there are no easy answers or quick solutions but in talking to a number of youth leaders there I became aware of the significant work among young people that our Church and others are aleady doing.


Again it is easy to undervalue the impact of adults

who commit their time and energy to leading youth clubs and fellowships and are giving young people the space to grow up in a safe but stretching environment - there is no substitute for the giving of this sort of practical care for the health of our society.


Both the ABMY Conference and Breakout a couple of weeks ago were impressive examples of this - and I was pleased to express the thanks of all the Methodist people to Eric Mustapha and the ABMY executive and all those leaders who were responsible for organising this event, and for all the work that they do in their local communities during the rest of the year.


It has been good to have such a youthful start to the year and I look forward to meeting others who are involved in a whole variety of children's and youth work as we continue our travels.
Posted by David Walton at 09:37 1 comment: