I was invited on Monday to attend a meeting in Skipton, where two Circuits were hoping to recruit someone to encourage and develop ministry and mission in the many rural chapels in that part of Yorkshire. Graham Jones from the Arthur Rank Centre was also present. There is no doubt that Circuits around the Connexion are looking to respond creatively to mission in rural areas; and seeking advice as to how to proceed, whilst also acknowledging that every single village is a different context. There is undoubtedly a feeling abroad that rural agendas are neglected in favour of urban ones and, whether or not this is true, these perceptions need to be addressed by a Connexional Church.
On Wednesday to Queen Mary University in Mile End, London to represent the Church at a 'Summit' called by Citizens UK - a grouping of faith communities and secular agencies with the common aim of improving life for ordinary people. It started in London, and is now spreading to different towns and cities in UK. The main thrust was to get organised nationally for the expected General Election in 2015, to challenge the leaders of all political parties on a range of social issues that need addressing. Both Justin Welby and Vincent Nicholls spoke, alongside Muslim and Jewish leaders. It was a fascinating mixture of local and national interest groups grappling short and long term with deep-seated social issues; and trying to address them at national, local and even personal levels. It will be interesting to see if Citizens UK's undoubted successes in bringing people together for specific causes at local levels, can be translated into a more nationally-focussed organisation.
Two very different meetings - focussing on specific contexts broadly labelled rural and urban - but a large number of common social factors. And I mused going home on the train after both meetings about how the Church is involved day in and day out with this myriad of life 'stuff'. Perhaps, both ministers and lay people, we underestimate just what we deal with every day on our Christian journey?
Posted by Unknown at 10:15 No comments:

Having been to the Irish Conference before, I had been looking forward all year to visiting friends across the Irish Sea. This year's Conference was held in Carrickfergus, a few miles north east of Belfast. From the moment we (Mark, Hayley Moss, Rachel Coates and Isabel) arrived, it was quite literally a breath of fresh air. The arrangements committee had recruited younger blood, and had been given its head, which resulted in a very different balance of inspiration and business, with a real emphasis on the former. That, together with the installation of a new lay leader (Ken Twyble) to replace Gillian Kingston after three years, and the groundbreaking election of Heather Morris as President, the first female leader of a major denomination in Ireland, made it an exceptional Conference. Lots of worship, plenty of Bible study, generous time for discussion, excellent inputs from people such as Pete Greig (24/7 prayer) and Phil Meadows - and we also did some of the usual Conference business along the way! It will be up to others to decide if the balance between inspiration and business was the right one; but it made for a much more youthful feel and an uplifting 5 days. The evenings too were full with celebrations, but the British delegation were able to enjoy a splendid evening meal with Diane and Richard at Edgehill on Saturday. For me, a lot of the enjoyment was meeting old chums - people I have worked with in MMS Ireland in the past, former and present Irish mission partners, General Secs of MCIreland - Donald Ker and Ed Mawhinney - who have been so helpful over the years; friends such as Winston Graham. And what a privilege to be taken to Bangor by Ken Todd to meet and pray with Pa - Leslie Wallace, who meant so much to Isabel and myself when we were in Sierra Leone in the 1970s. 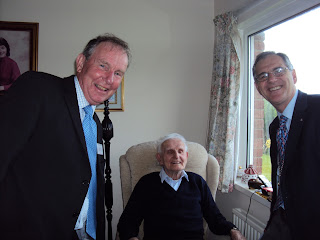 Back to Conference and lovely, gracious people, who looked after us very well indeed. Mark preached at the ordination service, and I preached at St Nicholas, Church of Ireland on Sunday morning - all the more significant following their Synod votes to go ahead with 'interchangeability of ministry' between CoI and MCI. This is a very significant breakthrough, voted almost unanimously by the CoI Synod. Apart from the excitement and media interest in Heather's election, there was also an air of anticipation about the G8 leaders flying into Belfast on Monday. There was a real buzz about the place.
Posted by Unknown at 09:27 No comments:

On Thursday, off to Darlington, where the sun shone for 3 days. Thursday afternoon in the Middlesborough and Eston Circuit with reps from the Foodbank, Trinity centre in Ormesby, and the ecumenical mission work of 'Together Middlesbrough. Then to Linthorpe Road Methodist Church to meet people involved in the Methodist Asylum Project; and finally to Normanby for tea (or lovely supper!), followed by a service of celebration for all that is happening jointly in the new Circuit - and it is impressive to think how many volunteers are enabling this outreach work to develop. The following morning a very different landscape, for we went via the Methodist School at Richmond and, leaving Mark there, ventured unto the beautiful Swaledale. Isabel's grandfather was a minister at Reeth, so it was a joy to see round the village school, now joined with Gunnerside further up the valley and where we had a school lunch with the children. Admittedly the weather was bright and warm, but what a great place to go to school. In the evening, over another delicious meal, I was asked to speak about World Church relationships. On Saturday morning Mark and I addressed Local Preachers, Worship Leaders and Lay Workers who had gathered at Bishop Auckland, before Isabel and I headed south on the train to London. The preaching appointment on Sunday morning was at Westminster Central Hall for their World Mission service, where Gordon and Denise welcomed us before worship which included the JMA presentations, some excellent music and choral singing, and an expectant multi-cultural congregation. It was quality worship. We had a very pleasant lunch afterwards, getting to know Denise and Gordon better. So today (Monday) it is back to the day job, a working lunch with Glyn, who works for the Oxford Diocese on rural affairs, amongst other rural-based jobs; and then to Greatworth for their afternoon Church Council. It has been a few days thinking about local, rural, town and city church life as well as world mission. Proper Connexionalism!
Posted by Unknown at 17:41 No comments:

For the third week in a row it was off to Derbyshire on Friday and the World Mission Conference held at Swanwick. Its roots are with Methodists for World Mission (MWM), but in recent years it has had a more ecumenically-minded week-end conference. This year's Conference was one of the best that I have attended over the last 39 years (where did those years go?). Concentrating on continental Europe, Bishop Sifredo from Portugal brought a group to lead the singing and worship; there was an excellent input on "Believing and Belonging in Europe in the 21st Century" from a Sociology expert, Dr Helena Vilana, from the university in Porto; and an extremely stimulating talk on "Europe and the struggle for global justice" from the Bishop of Derby, Alistair Redfern. He reminded us of the Schumann Declaration that "justice is bigger than the nation state" and encouraged me to be much more active in all aspects of politics (not least engaging with Europe and MEPs) if I want to make a difference in God's world. There were a whole range of workshops, including tax justice, and talking with Alasdair of Christian Aid over tea, I asked what got him interested in CA's work. His reply was that he had attended World Village (a summer fixture for some of us for about 15 years) for a number of years as a young boy, and he believed that's what started his interest. I reflected for the rest of the week-end on what seeds we sow, and often have no idea how God enables the plant to grow. Our job is to keep on sowing. I sensed that there were younger people getting involved again in the week-end, which has to be an encouraging sign. It was certainly an excellent event this year - intelligent, informative, inspirational - locating the Christian faith at the heart of 21st Century life in Europe.
Posted by Unknown at 09:31 No comments: