A figure lying on a park bench, shrouded in a ragged blanket which covers the head and face, but with bare feet showing... It might seem an unusual subject for a sculpture. Look closely, though, and notice that the feet bear the marks of having been pierced by nails. This homeless man lying on a bench is Jesus. 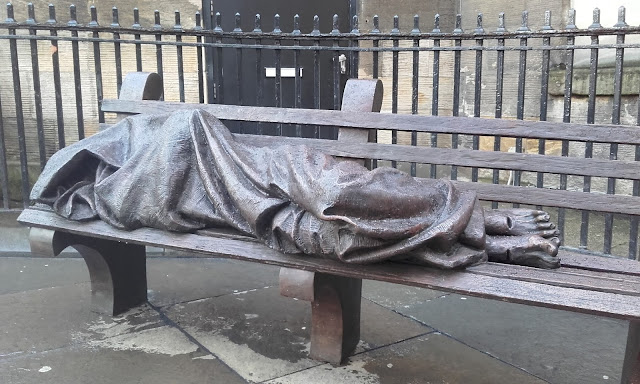 The sculpture was created by the Canadian sculptor Timothy Schmalz who, since 2013, has been seeking locations around the world for castings of the "Homeless Jesus".   Through his art he intentionally illustrates the words of Jesus in Matthew 25:40; "Just as you did it to one of the least of these who are my family, you did it to me".  His work has been controversial, with the first church for which it was made not accepting the sculpture in the end, and, as we know, despite a prolonged and vigorous campaign by Methodist Central Hall, Westminster, the council there would not grant permission for a similar installation.

So I was very glad to attend the unveiling of the "Homeless Jesus" in Glasgow city centre on Thursday 7th December. After some introductions by Father Willy Slavin, who initiated the idea, Rev. Ian Galloway (Church of Scotland Glasgow Presbytery moderator) prayed, using the striking words; "Here you are, Lord but not lording it, once more awkwardly in a manger laid. Still there is no room at the inn, not for the likes of you".  Matthew 25:31-46 was read by URC minister Rev. Mary Buchanan and the Roman Catholic Archbishop Philip Tartaglia blessed the sculpture. 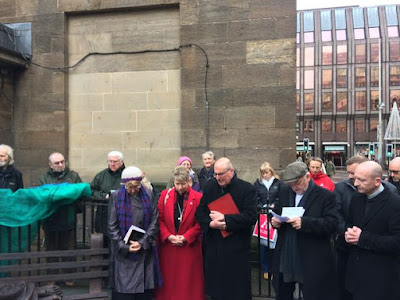 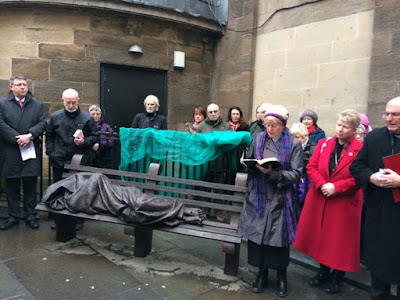 Not unusually, for Glasgow, it was quite cold, and began to rain during the ceremony, but this only served to highlight the real conditions in which many have to sleep rough night after night.  Grant Campbell, Chief Executive of Glasgow City Mission (far L in the photo above) told us that 50 people had spent the previous night in the shelter they provide in the city.

Other speakers highlighted the poignancy of installing this sculpture and drawing our attention to homelessness as Christmas approaches, when the streets are full of shoppers and when the stores are at their busiest, but also when we remember that even from birth Jesus had no secure home.

This is the first "Homeless Jesus" to be installed in the UK; there is one in Dublin and there are plans for one in Manchester.  Internationally they can also be found in many locations including the Vatican, in Madrid, in India and in several locations across the USA.  Here in Glasgow it is to be found in a much-frequented side road behind St. George's Tron Church, Buchanan Street.  After the ceremony we went inside the "Tron" for another event; the unveiling of a painting by Scottish artist Peter Howson, to link with the sculpture, and also depicting a homeless Jesus. 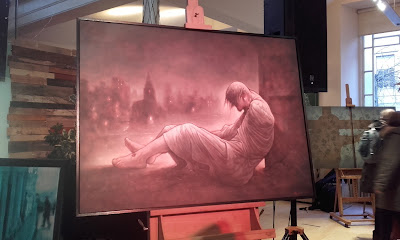 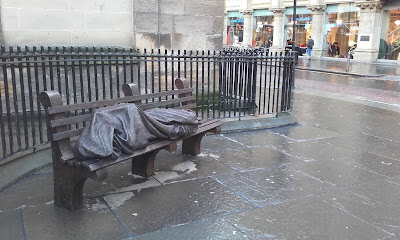 There is space at the end of the bench to stop and sit for a while... to keep Jesus company perhaps, to pray, to express concern at the existence of such widespread homelessness in a "land of plenty" (as another prayer described us).  Whether people do this or simply walk on by, I have no doubt that Glasgow's "Homeless Jesus" will convey its intended message with challenge and dignity.  Jill

A short video and report on Glasgow Live tells you more.