Yesterday afternoon I could have been wearing a wetsuit and white water rafting down the Lee River to celebrate a dear friend’s birthday.  But with rain and a temperature of 5 degrees I was only partially sorry that I had a prior engagement at the Whitechapel Mission for its annual service.

The Mission provides breakfast to around 300 people a day, many of whom are sleeping rough, all of whom are homeless or vulnerable.  People for whom rain, cold temperatures and the dangers of the street are more than just a nuisance. As I was told yesterday, the Mission saves lives. 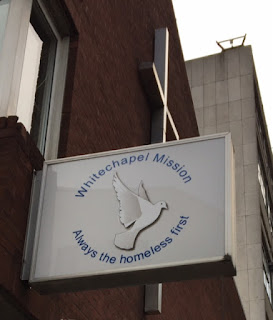 Earlier in the week I went to visit Whitechapel Mission to see them in operation.  I arrived at 8am, the centre was already full of people hungry and ready for breakfast, and the kitchen was staffed with volunteers cooking more eggs than I’ve ever seen in my life.  Each day, 365 days a year, teams of volunteers from city businesses, churches and beyond turn up at 5.45 to start preparing breakfast.  Cups of tea and coffee are served from 6am, with breakfast available for 50p (or free if people can’t afford it) from 8am.

People can have showers at the centre, and are given clean clothes from the vast clothing store, as well as personal items such as toothbrushes or razors.  The “Life Centre” is open later in the morning, offering help and advice – locating birth certificates so that people can claim the benefits they’re entitled to, helping to get people into hostels, referring people to drug and alcohol rehabilitation.

The Mission is an impressive feat of organisation – feeding huge numbers of vulnerable people, co-ordinating thousands of volunteers, receiving – and sorting - donations of food and clothing from churches all over the country.

But it is so much more than that.  As I said in my reflections at the service, it is the Church in action; it is an outworking of God’s love.  People in terrible situations are welcomed, known by name, helped to cope and to overcome huge obstacles, to see that things can be different.  The mission statement says: Since 1876, The Whitechapel Mission has been called to serve the men and women caught in the cycles of poverty, hopelessness and dependencies of many kinds, and to see their lives transformed to hope, joy and lasting productivity. Tony Miller, director of the Mission, said to me that it is vital that the two elements of the Mission – the worship and the charity – are not seen separately.  Both are church.

Rough sleeping is rising across the country, as are the numbers of homeless people in temporary accommodation.  Over the last year, the Centre has seen a third more people than it did the previous year.  All at a time when prices are going up and budgets are shrinking.

When I visited the Mission last Tuesday the church sanctuary was piled high with crates of food which had been donated from church harvest festivals.  Yesterday it was a calm and welcoming worship space once more.  But we were told that the tins of baked beans from harvest festivals, which in previous years had seen them through the year, were already running low, and there was also a desperate need for razors.

The Mission depends entirely on voluntary donations.  So how about donating the cost of a couple of catering tins of baked beans and a packet of razors?  And in rain and cold temperatures pray for those who cannot escape them.

Thank you to Tony and Sue Miller, Revd John Haynes, Keith Aldred and the many others who give time and support to the work of the Mission.
Posted by Rachel Lampard at 10:54 No comments: