People ask me about my Presidential year what do I enjoy most? Well I love all of it but I enjoy the railway journeys and meeting all types of different people talking about faith and sometimes bringing people to faith and giving them a small wooden cross.

The other Saturday I prayed for similar encounters on my journey but alas the people I met didn't want to talk.

The train pulled into Birmingham New Street Station and the platform was filled with men, they were going to Derby for a football match. The train was soon full of blokes and the table opposite mine had four supporters all using bad language as they put the cans of larger into some semblance of order in the middle of their table. 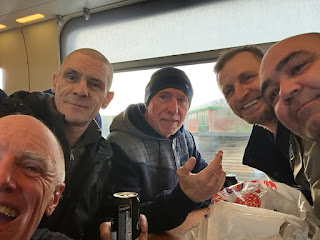 When one of the guys noticed my clerical collar he shushed the others and said “I’m sorry about our language vicar!”

I assured him that I wasn't embarrassed and one of his mates said: “Hey this is a good luck omen for the game we’ll win now”. This opened a conversation me trying to explain that Christianity isn't a good luck charm.

Now with these men I was a long way out of my comfort zone and as the journey continued they came at me with question after question...

Two of them were UKIP supporters, one had been in prison and one was a Jeremy Corbin Labour supporter. They threw everything at me: the state of the world; politics; refuges; the hypocrisy of the church; child abuse...

This certainly wasn't my easiest forum and I felt my answers were inadequate. The questions were so quick!

I did emphasis that my cornerstone of faith is love I told them that God loved them, which, of course, was quickly dismissed. Despite all this, I stuck with them and shot up loads of arrow prayers and answered their questions as best I could.

As the train pulled into Derby Station I decided to be courageous and ask for a ‘selfie’. To my amazement they were all keen and posed with me! One of them said: “I'm not on the picture can I please have one on my own with you?” - So we did! He then hugged me - to my total amazement – and I blessed him. 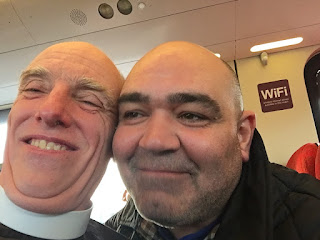 But what was even more astonishing was that as the others filed out past me, each one wanted a hug!
The last one was recently bereaved and I plucked up my courage and offered him a small wooden cross saying that I felt it would help him in his bereavement. He answered me: “Thanks but no – with all integers I cannot accept it, but thank you for offering it to me” and he got off the train.

Following this I felt quite down and had mixed feelings... ‘If only he had taken the cross I’d thought’...

Then it dawned on me that it must have taken him more courage to say ‘no’. If he had taken it, I’m sure I would have had a nice evangelistic story to share, but instead he had refused the cross.
But had he taken it, for all I know, he could have tossed it straight into the bin, but he didn't.

He answered me truthfully.

Jesus is ‘the way, the truth and the life’ and it’s so good that he was truthful with me at this level.

As an evangelist I've never had such as uprising response as these blokes hugging me, somehow the love of Jesus penetrated through and glory be to God for that.

Even in the opportunities that we think go badly God is there.
Posted by steve wild at 16:15 4 comments:

Do I need lessons in Woodwork?

Yesterday I received a message which warmed my heart but also made me chuckle – ‘Every blessing as you continue your fantastic Vice-Presidential joinery!’  Predictive text is amazing, but sometimes it comes up with unexpected alternatives.  I immediately sent back a message – ‘Well Jesus was a carpenter!’  (I hope they realised what I was talking about).


I assume the sender meant ‘journey’, but as I thought about it I realised that perhaps ‘joinery’ is a better word after all!  We have an amazing ‘Connexion’, and as I go around the country, and overseas, I realise just how important it is.  Jesus calls us into a community.  We are disciples together, learning and following Jesus.
John Wesley said there is no holiness but social holiness – we need each other, to be accountable to each other, to support and encourage each other, to join together in the journey.
My recent visit to the Leeds District was full of examples of that ‘joinery’ in action.  I was moved and inspired by the ‘Church in the Dale’ in Nidderdale.  The amazing Mike Poole is a real blessing for the churches in the Pateley Bridge Circuit. His faith and enthusiasm shines through, and there was a real feeling of ‘connectedness’ among people of faith of all denominations, and with the wider community in the dale.

At Summerbridge, I had such a surprise to see the inside of the church filled with signs of vibrant engagement with young people and families.
At Darley the wind roared, but the welcome was so warm.  At Glasshouses we saw how the church met the needs of the elderly in practical ways, such as tables in front of the chairs for worship – which also worked for meals.  That was an example of radical hospitality! 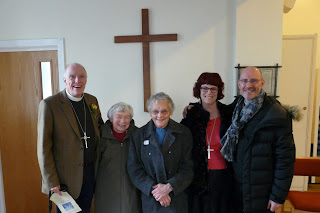 I will never forget my arrival at Wath, an extraordinary five sided building, which is the smallest chapel I have every seen, but a bit like a tardis with its gallery. As we opened the door, people had rushed there before us, and were singing What a Friend we have in Jesus.  The chapel is open every day for walkers and passers by to find a quiet space, filled with prayer. 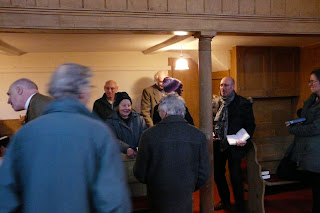 At Pateley Bridge we had a wonderful, warming lunch, and it was a joy to see not just people from all the churches in the circuit, but also people from the other churches, including Darren, the Anglican Vicar, who trained with Mike in Durham.  God knew what he was doing when he brought them both to Nidderdale! 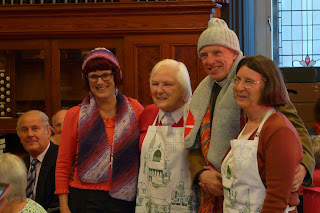 Small churches, in a rural area, together they are strong in faith, and witness to the love of God in action, and I thank God for them and ask his blessing on all the lovely people I met. 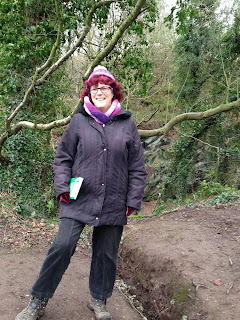 I feel God's love surrounding me every time I wear the scarf and hat knitted for me by the ladies of Pateley Bridge. Seen here on a New Year's walk at The Cloud!  I guess knitting is another sort of 'joinery'!
Posted by Jill Barber at 10:09 No comments:

Heritage and Mission in the Leeds District

Wesley Chapel, Harrogate, is a beautiful building, dating from 1862, that has been lovingly and sensitively restored so that the interior retains its sense of awe and history, but is a flexible and usable space, with a café in the entrance area.

﻿
﻿The challenge is how to use this treasure in the heart of the town, to share Jesus with people who no longer know him.  I was delighted to meet with a group to explore how their faith story might connect with people who will be drawn to this place through its history.

The inspiring story of this building and the people who built it and sustained it, is a story of faith and trust in Jesus. I was delighted to learn that Mary Bosanquet, one of the first women preachers, visited Harrogate in 1773, and preached at the White Hart.
﻿﻿

﻿﻿﻿﻿﻿ ﻿Oxford Place in Leeds was built in 1835, and it was so big that the preacher could not be heard at the farthest corners!  It was remodelled and reopened in 1898 as part of the Forward Movement to reach the urban poor.  It was not quite a central hall – but it was the closest thing to it!

Today, its location in the Civic area of the city, is both an opportunity and a challenge.  The vast building is home to charities and organisations working with LGBT asylum seekers, street women, the unemployed and the abused.
It has strong links with work with the homeless in the crypt at St George’s, and it was a real privilege to meet with the pastor and members of The Lighthouse, a church for people who have lived with chaos, and hear their story.

The future for Oxford Place is uncertain, and prayers are needed to discern the  way forward. I thank God for the incredible efforts of Deacon Jenny Jones and Revd Peter Whittaker, to make this a resource for sharing faith with the community.
﻿﻿ Our visit to the Leeds District was inspiring and encouraging, and I want to say a particular thank you to Sarah Cave, the super-organised and absolutely lovely Synod Secretary, who made sure that Steve and I were in the right place at the right time (most of the time!!), and even more important that we both caught our trains home at the end of a wonderful four day visit.
Posted by Jill Barber at 09:47 No comments:

What was on my Christmas tree this Christmas? 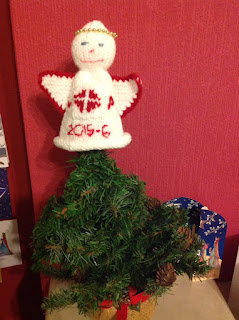 During December, hundreds of angels appeared all over Burley in Wharfedale, perched on railings, creating a real talking point, and bringing joy, excitement and a sense of anticipation to the community.

I was thrilled to be given my own unique angel, knitted by Viv Morrissey, when I shared in a joyful morning service at Burley, with Tim Perkins.

What a wonderful way to share God’s love and bless the community in public places and community spaces with the message of Christmas.

Any ideas for next Christmas?

Praying for a Miracle

As I reflect with grief on the state of the world – the suffering of hundreds of thousands of refugees who are hungry, cold and afraid, and the over-indulgence of others, like us in Britain, guarding the borders of our comfortable lives – I know the world needs a miracle.

It needs a miracle like the feeding of the 5,000.  A miracle of sharing.  It begins with one boy who opened his heart and shared the little he had.  This unlocked something in other people, enabling them to do the same. Instead of selfishly hanging on to what they had got, they offered it to others, and there was enough, more than enough for everyone.

So today, at the start of this new year of 2016, I pray for a miracle of radical generosity, and may it begin with me.


‘So here’s what I want you to do, God helping you. Take your everyday, ordinary life – your sleeping, eating, going-to-work, and walking around life – and place it before God as an offering …
Don’t become so well-adjusted to your culture that you fit into it without even thinking. Instead fix your attention on God. You’ll be changed from the inside out.’ (The Message, Romans 12.1-2)
Posted by Jill Barber at 10:33 No comments: