Blog for the Easter period

Gosh, I’m a long way behind Leo with my blog. Must try harder! Whilst Leo was exploring Brazil I have had a more leisurely time at home, sleeping in my own bed for more than three weeks running! I’ve preached in various churches across Cheshire, entertained family at home, been fed by Holy Week reflections and a shared in a joyful Easter morning service in my own church. 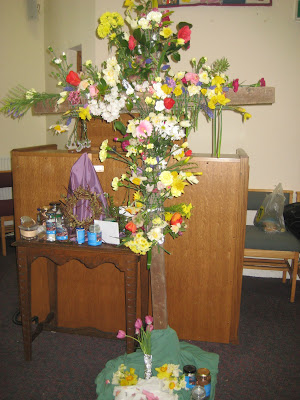 It has been a privilege to share in anniversary year celebrations in several churches. On Palm Sunday, in glorious weather, I was in the picturesque village of Cumberbatch, where the chapel is in an idyllic setting. The children waved palm branches and we all sang Hosanna! That evening I caught up with many old friends in Winsford as I led a circuit service. It’s a bit strange, though, sharing my experiences of the MRDF visit to Kenya when there are two Kenyan ministers in the congregation. They know a lot more about it than I do. The week progressed with reflections each evening led by our own minister John Fisher, and included a very moving communion service with our Anglican friends on Maundy Thursday. I chose not to process round town on Good Friday – for some reason those leading it want to sing Easter Sunday hymns as we walk – and opted for the indoor service which was quiet and humbling.  Easter Sunday I was re-introduced to my own congregation and it was great to be there, and share in the distribution of communion. As has become our custom, we each took flowers to transform the cross for display on the roadside I know there is debate about this but somehow it works for me).
In the awful weather of the holiday weekend we had the other set of grandchildren for a sleepover and went to the cinema as the least wet option on the Monday to see “The Pirates! in an adventure with Scientists” – possibly the only children’s’ cartoon film to feature Charles Darwin. Such are the privileges of being grandparents. Then, at the end of the week, I led worship at Gawsworth (See picture) , another lovely country chapel that has been well renovated, and  a united area service at Lower Withington; both places within 15 minutes’ drive from home though the former is in a different District. 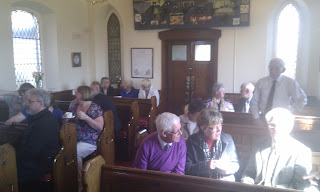 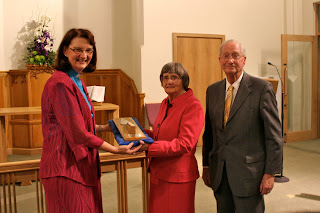 Good things tend to come in threes so the next evening saw me at Kelsall MC in the Delamere Forest Circuit where they have made a huge transformation to their building, which is now light and airy and beautiful. It was a joy to share in the service of rededication, where the trowel that had been used for the laying of the original foundation stone was presented by Joan and Allan Haworth. History was honoured as the church looks forward in its mission to the community.
Posted by Ruth Pickles at 17:49 No comments:


Two or three “firsts” during my visit to the South East District.  I don’t think:-

1)  I’ve ever sat in on another District Synod before – I’ve exchanged the Newcastle one for three others including Channel Islands tomorrow!  Fascinating and good to pick up ideas to re-cycle in the north!

2)  I’ve ever preached in a church that the Queen has re-opened before as I did at Windsor!  A service incidentally that reminded me again of Prevenient Grace – I might tell you sometime!

3)  I've ever spoken at a church which has an underground car-park as at Redhill!

A good visit with some welcoming people and challenging questions but which I shall remember most I think for the hour I spent with Kenneth Greet – just out of hospital after having been seriously ill but still full of kindness and faith as well as taking a keen interest in the life of our church (and the tea was good as well!)  Him praying for me was very very humbling.

By the time you read this I shall be island-hopping between Guernsey, Alderney, Herm and Sark (in four days!) for Synods, visits and services before a few days break as I prepare to celebrate a significant birthday.  3 score years!  A rail card!  Yippee!
Posted by Anonymous at 11:47 No comments:

Well what can I say about Brazil? Eight services, three children’s clubs, school visits, several projects, cultural exchanges, sharing of faith and of Methodism, food, food and more food and yes, the Amazon, Ipanema Beach, Sugarloaf Mountain and Christ the Redeemer on the Corcovado! Exhausting, stimulating, exciting, challenging . . . . . . you name it it was all of these and more and of course a huge privilege as well as providing enough sermon illustrations to bore the pants off everyone!

Having been back for less than 24 hours it’s hard to give as objective reflection but some things were very obvious:-

A few days recovery and preparation time now before Ministerial Synod where with my colleagues in the Newcastle Upon Tyne District I renew my promises made at Ordination. Then its back on an aeroplane to the South East and a few days later to The Chanel Islands. I think this is what’s called a frequent flyer!

Please pray for the Methodist Church in Brazil especially on “their day” in our Methodist Prayer Handbook (9th) They have much to teach and inspire us with but plenty of challenges of their own too!

Posted by Anonymous at 16:29 No comments:

Living in Cheshire, which is beautiful but for the main part rather flat, it’s always a joy to reach that part of the M6 which begins to twist and turn amongst the magnificent Cumbrian fells. My visit to the Cumbria District (joint with Leo) began with an unexpectedly trouble free drive (Friday teatime!) to Richard and Sue’s home, the District manse in Penrith.

Saturday saw a gathering of some 250 from across the district to focus on ‘Going for Growth’. Between us, Leo and I led sessions on pastoral and spiritual care, and we were all well cared for by Penrith Methodist Church between sessions. What wonderful premises too, for a community building, and not only very helpful for worship but used by Radio 3 to broadcast a concert a few days later. 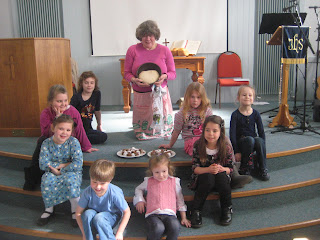 On Sunday I was picked up by my chauffeur, Jim, and had a tour of the Lake District in between preaching twice and visiting the MHA home in Penrith - and all this in glorious weather. The morning worship was at Wigton, where we made bread during the service assisted by a keen group of children before they left during the sermon to make truffles to be given out as people left (Mothering Sunday). Even those of us who have foregone chocolate for Lent could legitimately eat one! About 30 people stayed to share lunch, and I was able to congratulate the local congregation on their adaptation of the building, again to make a useful community space. There is much of this in Cumbria – on our drive we passed the chapel that hosts a village’s disabled loo – are there others around the country? 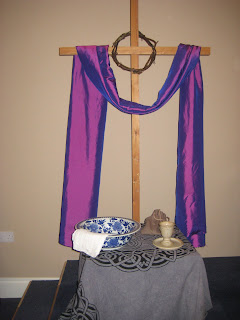 Back to Penrith, where the Friends of Woodlands MHA hosted afternoon tea, and I was able to chat to about 16 residents, one of whom is the uncle of the Circuit Meeting Secretary in my own Circuit. I never cease to wonder at the resilience of some of our oldest members, who continue to play for hymn singing in their nineties and show a continued interest in world affairs as well as those of the church. Then, on to Kendal where Sandylands MC has had a major makeover, and Leo and I shared in a circuit service which was enhanced by a worship group whose members ranged from teens to eighties.

Monday was the day to visit two significant and impressive projects: the Food Bank at Cockermouth, and Shackles Off youth project in Seascale. Of course, in true gospel fashion, both of these happen without fuss or showy building. What does it say about our society in this day and age that Foodbanks are necessary and proliferating? We heard of a family going 6 days without food, and many people who did not have money to buy food for the next day. So people can be referred from a variety of sources to collect a pack containing basic 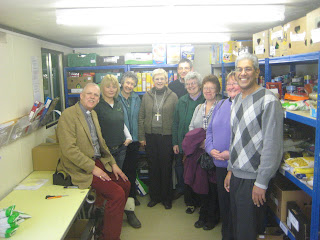 essentials which have been assembled by volunteers who work under the coordination of a paid staff member and group of trustees. We also heard a moving personal account of what it was like to be affected by the dreadful floods of November 2009, and how Churches Together in Cockermouth provided a large band of volunteers to work alongside the Emergency Services, moving people to safety and providing loving care for those who had to abandon their homes and possessions.

Shackles Off is a remarkable project for young people that grew out of the vision of a remarkable woman, Lyn, who came to realise that God was calling her to work amongst young people in Seascale. Their mission statement is: To help young people foster their personal, social and spiritual development and to empower them to make a positive and fuller contribution to the local community and to society. The project is nurturing teenagers in their faith journey, and has links with the local Methodist Church. On Easter Sunday (8th April) several young people will be baptised in the sea; given that temperatures fell below freezing last night (5th April) I hope they will be wearing wet suits! Please pray for these, and all those who will take a new step of faith this Easter. No doubt there will be news on the website: www.shacklesoff.org.uk.

We progressed to Workington, to visit another MHA, this one recently taken over from Southern Cross, and had a useful talk with the Manager about the changes involved. It was good to hear that MHA provide thorough training for their staff about the different systems now in use.

That evening we had a meal at the manse with members of the District Public Issues Team. Every district should have one, if it consists of such people as we met there: people from many walks of life who have a keen interest, and not a little expertise, on some of the major issues facing our society today. It was the day before the final vote on the Health and Social Care Bill, and we heard passionate views expressed on how the NHS would be affected. Trident is also a local issue, with the Barrow ship yard being a major employer in the region. Difficult issues that Christians must grapple with.

The sun shone on our final day, as we travelled to Ambleside MC for a morning with Presbyters and Lay Workers and an afternoon with Supernumeraries, spouses and widows. The church is a symbiotic project with the Anglicans – new premises adjoining the Anglican building, whilst the former MC has been converted to affordable homes (see www.helm.org.uk). Methodists worship 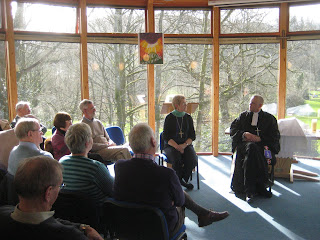 in the Wesley Room which has floor to ceiling windows looking over (yes, you’ve guessed) magnificent scenery! As we worshipped in the afternoon we were somewhat alarmed by a low flying aircraft – a local said ‘that was very low flying’ on a level with the communion table!

The day finished with a meal at the Bishop of Carlisle’s Home, where we had an ecumenical meal that was full of laughter and good conversation. Cumbria is a very special ecumenical county, as Methodists, Anglicans and URC have pretty much coterminous boundaries, as they do with the County. Some very good working relationships have been developed which set an example to many other areas. In fact, there is much that the rest of the connexion can learn from Cumbria.

Back for the final time to my wonderful hosts Heather and Lawrence, who had made me feel so much at home, and determined to visit Cumbria again for a holiday before too long. I will!

Posted by Ruth Pickles at 17:23 No comments: