Shared blog of our visit to Israel/Palestine

Alison and I have spent a week visiting Israel/Palestine, our aim was to meet a variety of people and listen carefully, exploring the dynamics of the current situation across the faith communities. We are deeply grateful to all those who gave us their time and particularly to Steve Hucklesby, from the Joint Public Issues Team (JPIT) who arranged and accompanied us on the trip.

We were both deeply challenged by what we heard and saw and have re-committed ourselves to pray for peace and justice for all in this land. It was particularly sad to hear of so little hope amongst the Palestinian community for peace and justice against the backdrop of check-points, settlements, house demolitions and water restrictions. Our visit took place amidst the significant disruption and dramatic political change in the Middle East and we were very aware of the increasing unease this creates in Israel/Palestine.

Click here for Frequently asked questions about the conference decisions 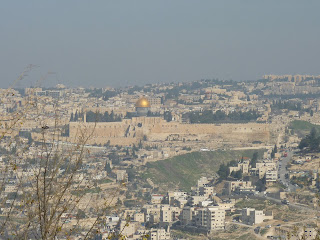 Prayer from a Palestinian Christian
Pray not for Arab or Jew,
for Palestinian or Israeli,
but pray rather for ourselves,
that we may not divide them in our prayers,
but keep them both together
in our hearts.
Here are some of the places and people we visited in Israel/Palestine- 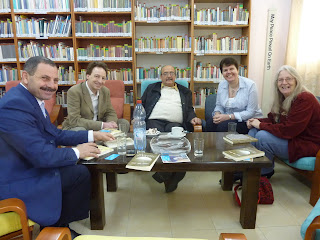 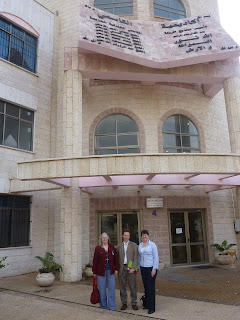 This college is the first Israeli-Arab Institute of higher education to obtain certification from the Ministry of Education. Their faculty is both Muslim and Jewish, while the student body is Muslim (95% female). The Academy educates for the acceptance of diversity, empowerment of women and standards of excellence.


Rabbis for Human Rights - Rabbi Arik Ascherman
Founded in 1988, Rabbis for Human Rights (RHR) is the only organisation of Rabbis in Israel from all the streams of Judaism that gives voice to the Jewish traditions of human rights. Dedicated to physical security and moral vision of the State of Israel as reflected in Israel's Declaration of Independence. RHR develops educational resources on Judaism and human rights and teaches in Israeli schools and pre-army programs; lobbies for economic justice in Israel; provides support for Palestinian families facing home demolition. Rabbi Arik Ascherman came to Israel in 1988 and trained as a reform Rabbi, he has been beaten and arrested, including for running in front of a bulldozer demolishing homes in East Jerusalem in 2003. 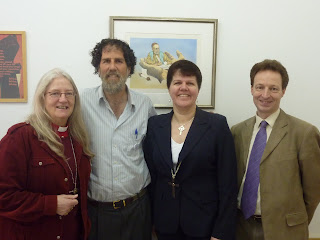 Btselem - Jessica Montell
Btselem in Hebrew literally means , 'in the image of' and is also used as a synonym for human dignity. The word is taken from Genesis 1 v27, 'And God created humans in his image. In the image of God did he create them.' Btselem is the Israeli Information Centre for Human Rights in the Occupied Territories and was formed in 1989 by a group of prominent academics, attorneys, journalists and Knesset members. It documents and educates the Israeli public and policymakers about human rights violations in the Occupied Territories, combats the phenomenon of denial prevalent among the Israeli public helping to create a human rights culture in Israel. Recent work includes:-
Rabbi David Rosen
We were generously treated to lunch with Rabbi David Rosen. He served as the Chief Rabbi in Northern Ireland and was a founder of Rabbis for Human Rights. Currently he serves as International Director of Interreligious Affairs of the American Jewish Committee, he is a special advisor on interfaith relations to the Chief Rabbinate of Israel. Rabbi David offered us a rich history of Jerusalem and Israel illustrating the competing narratives over history. He stressed how important he felt it was that faith leaders meet in the Council for Religions where dialogue can take place on the current conflict. 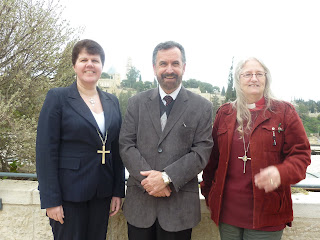 Bishop Suheil Dawani
Meeting Bishop Suheil Dawani was a great joy but we were very concerned to learn that Israel’s Interior Ministry has revoked the residency permit for The Rt Revd Suheil Dawani, to live in Jerusalem. Bishop Dawani is Palestinian and has spent most of his life and ministry here, but cannot obtain either citizenship or legal residence in Israel, since he was born in Nablus, i.e. in the West Bank, which has been under Israeli occupation since 1967, but has not been annexed to Israel. Since the Bishop has of course remained at his post, in Jerusalem, without the permit, he could be arrested at any moment, be put on trial for being in Israel illegally, be sentenced to a prison term – or simply be forcibly removed from Jerusalem. This situation is causing deep worry to the Christian community in the Holy Land and we committed to praying that the situation would soon be resolved. 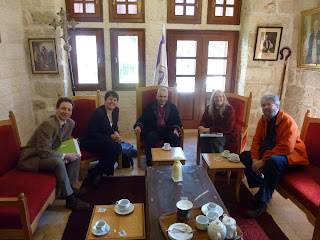 Latin Patriarchate of Jerusalem
We spoke with Bishop William Shomali and the Latin Patriarch of Jerusalem who were both anxious to remind us to pray for all of the people of this land, for justice and peace to be a reality. 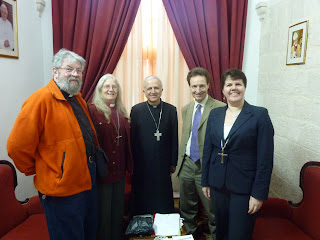 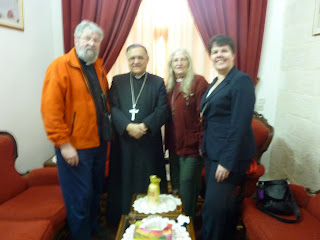 Israeli Committee Against House Demolition
ICAHD is an Israeli peace and human rights organisation dedicated to ending the Occupation and achieving a just peace between Israel's and Palestinians. In particular ICAHD resists Israel's demolition of Palestinians in the Occupied Territories where over 24,000 homes have been demolished since 1967. Israel's policy of house demolitions violates International law and constitutes a major obstacle to achieving peace and reconciliation. What kind of peace can exist for any community in the absence of justice? We spent a morning with the staff of ICAHD visiting area of East Jerusalem, where over 2,000 homes have demolition orders over them. 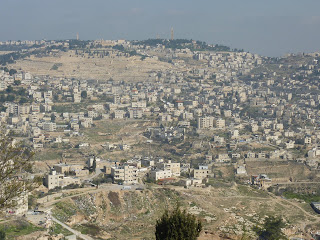 Arab Evangelical Schoool, Ramallah
Alison and I visited the Arab Evanglical School in Ramallah joined by our colleague, Jude Levermore (Methodist Youth Participation Development Officer) where after a tour of the school we chatted with some of the students. They were wonderful to engage with, lively, energetic and full of fun until we asked them, 'What were their hopes for the future?' They sadly all responded quickly that they had no hope for peace and justice in the future for their community. In all of our visits this was the first time we had heard this from young people with such firm conviction. We were deeply saddened and felt that any society where the young people were growing up without hope for their future needed to urgently reflect on a different way ahead. The encounter reminded me of an old song by Martin Joseph.
When the children have no hope there is no hope at all.
When the children cannot smile there is only tears.
When the children cannot see.
No-one to set them free.
When the children have no hope what have we done? 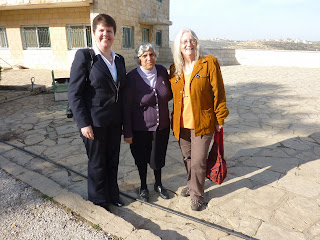 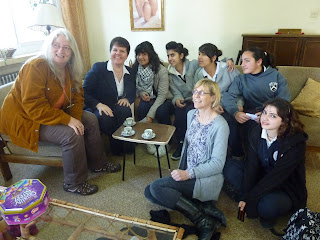 Bethlehem Checkpoint
One of the most heart-wrenching experiences during our visit (Alison described it as gut-wrenching) was to go through the Bethlehem check-point at 6am as the Palestinian community leave to go to work. Some of the men in particular sleep outside near the check-point so they can be the first people in the queue. We travelled though wire cages and scanners presenting our documents on several occasions. Whilst we acknowledge security is important, it seems deeply de-humanising to treat people in this manner.

We met two members of the Ecumenical Accompaniment Programme in Palestine and Israel – EAPPI on duty at the checkpoint. EAPPI is a scheme whereby Christians from all parts of the world can live and work in Israel and Palestine, alongside ordinary people, for a period of several months. The Methodist Church supports the EAPPI, and in recent years a number of British Methodists have gone to Israel/Palestine as Ecumenical Accompaniers. By living alongside Jews, Muslims and Christians, the Accompaniers can demonstrate solidarity and support to those affected by the political, economic and social difficulties. Accompaniers also learn a great deal about the issues, and are encouraged to report back on their return to their home country. General information and real-life stories from Ecumenical Accompaniers can be found by clicking here.... www.eappi.org 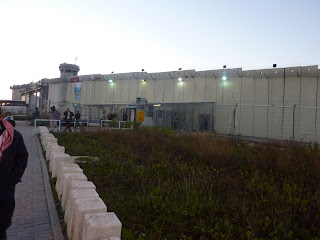 Hebron
Our visit to Hebron was accompanied by one of the World Council of Churches Ecumenical Accompaniment Programme Participants (EAPPI). Hebron is very much a divided community with Jewish settlers and Palestinians living with different laws and access rights. Below is a street of shops, the metal grids are to prevent the objects which are thrown down by Jewish settlers from hurting Palestinians. Apparently urine used to be poured out of windows but currently bleach is preferred thus destroying the goods for sale below. 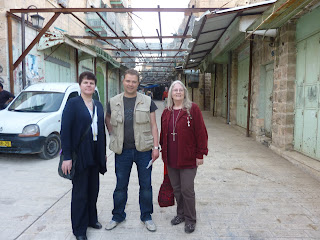 Blockaded streets in Hebron dividing the Palestinian and Jewish community, since Jewish settlers returned. Over 2,000 soldiers permanently guard the 400 members of the Jewish community. 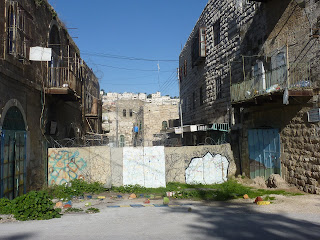 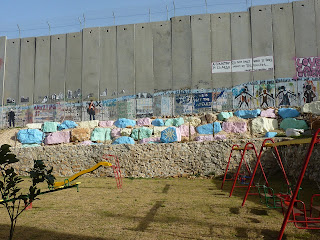 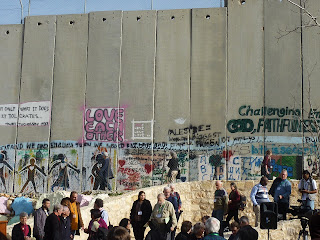 Worship at the Separation Wall in Bethlehem 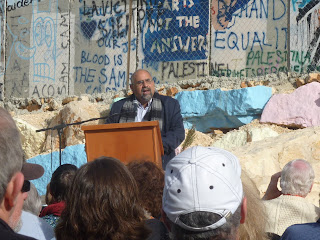 Early one morning we joined members of the Sabeel conference to worship beneath the separation wall in Bethlehem. It was a deeply moving and disturbing experience. We gathered at this part of the wall, near the oldest refugee camp and the oldest settlement and beside the only play area for children in Bethlehem As we heard read the text from Ephesians 2 v14, 'For he himself is our peace, who has made the two one and has destroyed the barrier, the dividing wall of hostility' there was a profound sense of prayer and yearning for all of the people of this land. 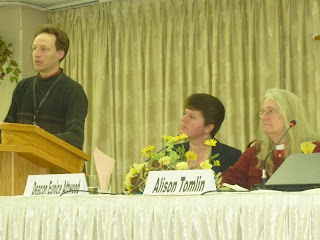 Alison, Steve and I all had the privilege of attending and addressing the Sabeel Conference which took place in Bethlehem during our visit. The theme of the conference was 'The Church and Empire' and reflected on the bibilcal themes of power, justice and faithfulness and resistance.

Sabeel strives to empower the Palestinian community as a whole and has programmes directed towards woemn, youth, clergy and community development. Sabeel, 'seeks to be a refuge for dialogue and to pursue ways of finding answers to ingoing theological questions about the sanctity of life, justice and peace.

Meeting at the British Consul in Jerusalem 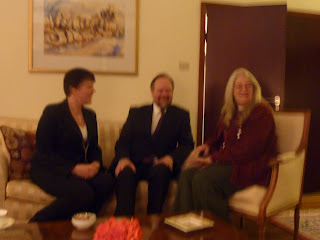 Did you meet any mainstream Isralis?

Sorry to be a wet blanket, but in the current economic climate when many Methodist churches (and the individuals within them are struggling to keep their heads above water) don't you think these lavish overseas trips could be replaced with a bit of old-fashioned encouragement by letter or even make use of new technology and communicate on Skype? Have a bit of sensitivity to those of us who won't even be able to have a few days in Skegness! It's a case of identifying with the poor (in this country!) I'm afraid. Don't forget your humble roots, Eunice!

(Why are anonymous comments approved? It seems a shame that when someone is prepared to use someone's personal name, that they are not prepared to "own" their statement.)
On behalf of this Methodist please continue with "our" search for understanding and truth. I realise the process is flawed as you will rarely be able to get a truly balanced visit to any situation. But please continue - you are in my prayers. Every blessing.

No, Methodist Preacher, they never meet with mainstream Israelis. Saves them the problem of inconvenient Palestinian facts, like the recent barrages of rockets in the south, the brutal slaughter of the Fogel family in their home, and last week's bombing in Jerusalem.

Funny how how happily they travel--they don't mind being humiliated at the airport security checks due to Islamic terror. But Israelis are evil for running the same checks on a population that honors terrorists by naming streets and public squares after them.