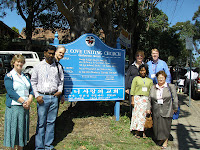 G'day. Am blogging from Australia from a very slow computer - but the connection is free so has a lot going for it! Now on a few days holiday after a week or so at the World Methodist Council Executive meeting in Sydney and thought I would share something of last Sunday. All of the representatives at the Conference and any accompanying partners (about 200 in all) were allocated to go to over 30 churches around Sydney on Sunday morning where members of the Executive had been asked to preach and share with local congregations.

So, last Sunday morning, six of us - Garry and myself, Jenni Sweet and Anne Vautrey from the UK, Vishwas from India and Margaruita from Bulgaria, met at Wesley Mission at 8.15 am to be taken to Lane Cove Uniting Church for the morning service. Lane Cove is to the north of Sydney so we crossed the famous Harbour Bridge, which was an experience in itself. The people there were welcoming and the service very familiar to those of us from the UK at least. Some of the concerns expressed were very specific - with sharing at the beginning of the service about the terrible droughts in certain inland areas, but the style of worship was a fairly formal communion service.

I was the Preacher and had only heard which church I was to be at on the Thursday afternoon which was followed by hasty conversations with Gerry Duncan, the minister there. I was also asked to share a little of what the World Methodist Council is. (More of that at a later point!) They were using the lectionary readings so I focused on the gospel reading of the lost coin and sheep.

After the service there was coffee and then we vacated the building so that it could be used by a Korean congregation (just as happens in my home church in Ruislip). We were then taken on a guided tour of the area and given opportunities for photographs of wonderful scenery before being taken to anothe Uniting Church centre for a barbeque lunch. It was good to share with th congregation there.

We arrived back at Wesley mission just in time for an afternoon reception and then the evening service in the Wesley theatre led by Keith Garner, one time Chair of the Bolton and Rochdale District and now Superintendent Minister and Chief Executive Officer of the Mission. What fabulous work is done there! The service was fabulous and set us up for the rest of the Conference. I look forward to writing more when I can get a faster connection - or should that be Connexion?!

It is good to share with the larger Methodist and Uniting Church family - even if the frustrations of our home churches are sometimes magnified. More of that later.
Posted by RubyB at 12:46