This morning I travelled from High Leigh in Hertfordshire (leaving the brilliant Connecting Disciples event early) to Notting Hill Methodist Church. Exiting the tube station and turning into Lancaster Road I immediately noticed graffiti on a wall, "Justice 4 Grenfell" 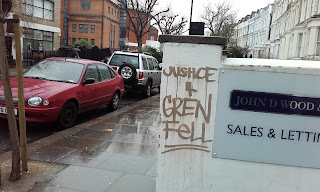 and moments later the wreckage of the burnt out tower block came into view. It is the first time I have been there and I found myself very moved and not a little shaken. 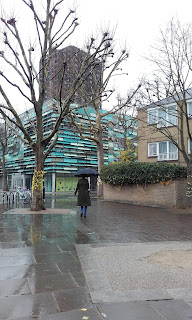 At the church - still bedecked with flowers, soft toys, photographs and tributes (although, apparently, the scale of this now is nothing to the weeks immediately after the fire in June) - I met Rev. Mike Long, the minister. Mike had only been in the appointment for a few months when the tragedy struck; many of us have followed in the media the extraordinary way in which he and the congregation at Notting Hill have embraced and responded to this horrendous "knock in the night" right on their doorstep. Mike says it has radically altered his life and his ministry. The Methodist Church is blessed to have him. 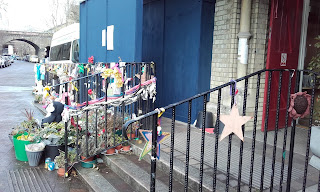 Our meeting was to talk about "Lament" and to record a brief interview between us which will form part of the Good Friday 3pm programme on BBC radio 4 to which Mike will be a main contributor. Producer Trevor Barnes, whose voice was very familiar to me from various programmes, particularly the religious affairs coverage of "Sunday" at 7am each week, conducted the recording. 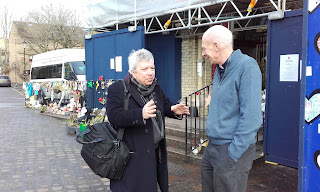 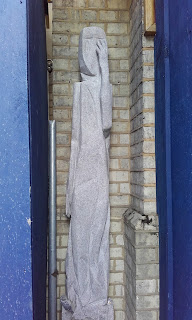 As we left Mike pointed out to me a poignant sculpture which has been made and given to the church.
Depicting a weeping figure, perhaps a woman, it chimed strongly with all that we had been sharing about Good Friday, loss and lament.
It currently hides between the boarding which is necessary for some ongoing rebuilding work. Perhaps that is fitting; so often our tears and sorrows are hidden, passed by, unnoticed. Perhaps this broadcast will be one small channel for the grief of a community to continue to be heard and shared. Jill.
Posted by Jill Baker at 18:17