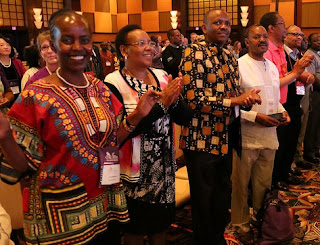 The global Methodist family meets once every five years in the form of the World Methodist Conference.

And we are a gloriously diverse lot.  Over 2000 people have been gathered in Houston, Texas, to worship, have fellowship, learn and celebrate.  Together we represented more than 80 Churches in 133 countries, from Chile to China, from Sweden to South Africa, from Tanzania to Toga.  We may have had different languages, different cultures, different ecclesiologies, but we were united in the love of God, and as Churches with shared roots in the ministries of John and Charles Wesley. 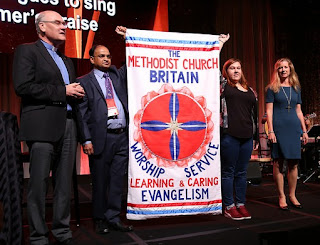 The variety of traditions and countries was celebrated on the first evening when representatives of each Church carried a banner onto the stage representing their country or denomination – all whilst singing “And can it be?”, a deeply moving occasion.

This variety was also represented in the preaching and teaching.  On the first evening the Revd Professor David Wilkinson of Durham University did a lively double act with Dr Jennifer Wiseman, a leading astrophysicist.  Together they explored the awesome nature of the universe, through stunning photographs from the Hubble telescope and a reflection on Psalm 8.

On Thursday, Bishop Vashti Murphy McKenzie of the African Methodist Episcopal Church gave a sermon in the finest tradition of the American deep south, full of emotion, drama, call and response.  She challenged us with the question: “What does your love look like?”.  It’s the first sermon I’ve ever heard which ended with the entire congregation holding hands, dancing and singing “Love Train”!

Grace Imathiu, the Kenyan author and preacher, led a bible study looking at the story of the Prodigal Son.  She reminded us that using this title distracts us from the fact that the parable is actually about the father, not the son.

Of course, even with such inspirational input, the most valuable part of the Conference is the conversations you have with Methodists from all over the world in the coffee queue, the lift or over breakfast.  We met Ann, a clergy woman from Hong Kong, who served with the US military as a chaplain.  We met Robin who led young adults’ work in Australia.  We met Chap and Julie, leaders in Christchurch Methodist Church in Sugar Land, Houston, whose choir led some of the worship and whose church sponsored a lunch.  We met Bishops galore, from small Churches, such as the tiny but growing Methodist Church in North Myanmar to the enormous Nigerian and Korean Methodist Churches.  We also met the American Para-Olympic athletes who were staying at the same hotel.

The theme of the conference was “ONE” - One God; One Faith; One People; and One mission: we have such diversity as Churches and as people from around the world, but we have Unity as we worship the one God.

Now this isn’t to pretend that we are one big happy family all the time.  It is clear that there are tensions within Churches, and between Churches and nations. And these tensions were apparent at times during the course of the gathering.  We have different priorities and pressures, and the gulfs between the cultural realities within which we practice our faith are immense.  But as speaker after speaker reminded us, we do not create unity, rather we are called to preserve the gift of unity given by God in Christ (Ephesians 4.2) in the way we live our lives and the way we are church where we are.  This is a big calling.  It is not a passive acceptance of the status quo.  Instead it is a challenge to love.  The kind of love that disrupts as well as brings peace.  Love that costs and doesn’t give up, that not only inhabits the church, but pours out into the world.

The World Methodist Conference took place at the same time as the World Federation of Methodist and Uniting Church Women.  To our delight one of the British delegates, Alison Judd, was elected as the World President.  We know the Methodist people will want to offer their congratulations to Alison, and also Carolyn Lawrence who took over as the Vice-President of the Britain and Ireland unit, and assure them of our prayers.

We were only able to attend the first few days of the Conference as we were scheduled to be at Wesley’s Chapel and Methodist Central Hall Westminster for the first Sunday of the new Connexional year.  As such we missed the session led by one of the British delegation, the Revd Dr Joanne Cox-Darling – though we heard later that it was inspirational.

We begin this year encouraged and enthused by the unity without uniformity of our glorious Methodist family under God.
Posted by Rachel Lampard at 09:53