So, while Richard went from Yorkshire to London, Liz and I did the opposite journey and went to Yorkshire for the weekend. 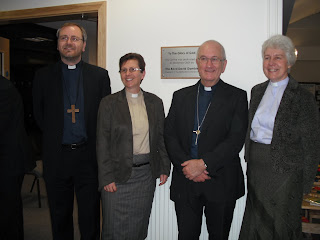 Saturday afternoon saw a service to celebrate the opening of Phase One of the COGS (Centre on Gracious Street) redevelopment at Gracious Street Methodist Church in Knaresborough. What has been built is a most exciting, creative, attractive and eminently useful building - well worth a visit to see what can be done when a church believes it is called to serve the community in which it is placed. The service was lively (with a world premier of a new Brian Hoare hymn!) and well attended, with lots of civic representatives and people from the wider Knaresborough community. There was a 'buzz' about the whole occasion. And, while we celebrated the completion of Phase One, it was also the time to launch Phase Two of the development - so there's lots more work to be done. But what a brilliant start! (Photo shows previous minister David Ely, present minister Gail Hunt, me and the Leeds District Chair, Liz Smith.) 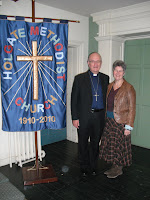 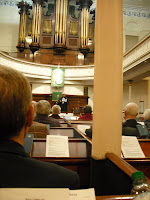 On Sunday I returned to York South Circuit, where I had served as a minister in the 1980s. Morning worship was at Holgate, whose centenary year this is. (Liz and I posed by the banner made to celebrate the centenary)

Evening worship was at Central Methodist Church in the City Centre of York (left), where I had been the minister and where Liz and I were married in 1987.
A wonderful opportunity to meet up with old friends and hear the latest news. Also, to see how churches respond in the 21st century to the challenge of sharing God's love with the community in which they are placed
Posted by David Gamble at 12:52