Interfaith seder style dinner in the House of Lords 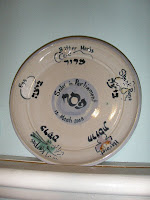 I am now the proud owner of a new plate! (See left) The plates were specially made for a "Seder in Parliament" held last night in the House of Lords which was preceded by a reception held in the State Rooms of the Speaker's House in the House of Commons.
The event had been drawn together by a wide range of people including Mark Winer, the Senior Rabbi of the West London Synagogue and Robert Wright, the Speaker's Chaplain and a Canon of Westminster Abbey. The members of the West London Synagogue were hosting the dinner, led by Lord Mitchell.
There seemed to be well over 100 people sitting down to share in the Dinner, a mixture of Bishops and Imams and Rabbis and people from the Hindu community as well as MPs and Lords and lay people from different backgrounds. There was the odd Methodist or two - I spotted Baroness Richardson and managed to say hello at the Reception but we didn't see each other again after that.
We used a special Interfaith Haggadah - the traditional liturgy that Jews use at their Passover Seder. This version was dedicated to the parents of Michele and Clive Warshaw who financially supported its production and also to "a better understanding between people of different faiths and to encourage people to realise that Jewish practice and tradition is not so different from their own". And in the foreword Rabbi Winer explains something of the Haggadah and his hopes for interfaith dialogue. "The Haggadah relates the story of the liberation of our ancestors from slavery in Egypt. We follow them from their dark days of slavery to their joyful first steps in the Sinai desert, as the waters of the Red Sea close behind them."...."As the story is told we sing and chant and encourage each other to ask many questions, for this telling is a way to pass the story on from generation to generation. If, during the course of the evening, we truly feel, even a little, that we havge been slaves and have known liberation, then our Seder will have been a success"....."For an Interfaith Seder, we thought it would be appropriate to find thoughts about freedom from other traditions and leaders, therefore you will find wise thoughts from different religions; musings on libery and speeches of freedom woven into our text. We cheerfully admit that what we have chosen is entirely subjective and we hope that this enterprise will act as a spur to help you think about what freedom means to you."..."May we, the many different peoples who make up this island, never lose our thirst for freedom nor our desire to welcome the stranger into our midst."
It was a great evening. Thought provoking but also lots of fun as the members of the West London Synagogue on each table helped us to find our place in the liturgy and eat and drink at the right time as well as joining in bits of the singing in Hebrew. This felt like a truly interfaith event where the traditions of one group were being opened up for the benefit of others.
Lots to think about - and yet another inch on the waistline as I go today to a briefing on asylum issues and then to join the Diaconate at their convocation before a weekend in East Anglia.
Posted by RubyB at 09:08

Sounds as though you enjoyed the Interfaith seder dinner in the House of Lords. but have to ask, seriously, WHY did you go? Was it a chance to catch up with friends or some other reason. I think that we as Christians need to be respectful of those of other faiths but hold true to the Gospel truths we profess and not be timid in defending our faith.